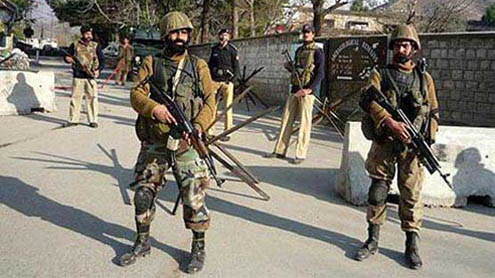 LAKKI MARWAT: At least nine security personnel were martyred and eight others injured when terrorists attacked an army camp in the town of Serai Naurang in Lakki Marwat, Media reported on Saturday.

According to security officials, militants equipped with heavy weapons and rocket launchers attacked the army camp at 3:45am.Army personnel retaliated with full force and the exchange of fire lasted for an hour.At least six attackers were killed in retaliation, an official said. Search operation is underway in the area.

TTP spokesman Ehsanullah Ehsan claimed responsibility for the attack in a telephone call to The Associated Press from an undisclosed location. He said four suicide bombers were involved in the attack. He said that three of them were killed and the fourth is still resisting.Ehsan said the attack was in retaliation for the recent deaths of two Taliban commanders in U.S. drone strikes. He accused the Pakistani army of helping with the attacks.The attack followed a suicide bombing at a mosque in Hangu on Friday that killed 23 people and wounded more than 50. – DunyaNews