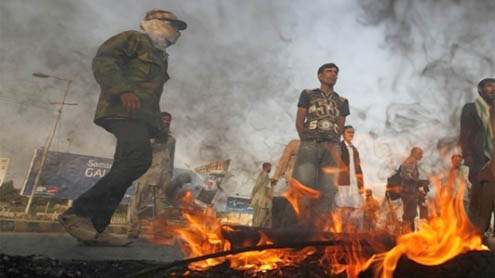 ISLAMABAD: The continuing target killings and deteriorating law and order situation in Karachi dominated the debate in Upper House of parliament on Friday.

Some PML-N senators termed the Sindh government as senseless, whereas the JUI-F legislators walked out against the killing of religious leaders and imposition of governor’s rule in Balochistan. JUI-F’s Senator Haji Ghulam Ali, on a point of order, said media had showed the killing of Mufti Abdul Majeed Deenpuri and others in Karachi. The videos, he said, clearly showed that it is a target killing and killers have been identified clearly.

Now, it is responsibility of the law enforcing agencies and intelligence organisations to trace the culprits and give them exemplary punishment, he remarked. Senator Ali questioned why the law enforcing agencies had failed to arrest the culprits, saying it shows that the government is involved in all such cases. He demanded the government immediately arrest the killers before the situation becomes uncontrollable.

Senator Ch Jafar Iqbal told the Senate that when Hakeem Saeed was killed, former prime minister Nawaz Sharif removed his own democratic government for the restoration of peace in Karachi. He claimed that the provincial government of Sindh had totally failed to protect people’s lives and property and suggested that it should resign over the lawlessness in the city.

Meanwhile, ANP’s Zahid Khan said it is regrettable that Karachi is burning, but Interior Minister Rehman Malik was on a tour to the UK. The interior minister, he said, had frightened people that there would be terrorist activities in Karachi but no one was arrested. The minister should take appropriate measures to stop such activities, the senator demanded. Zahid Khan announced that the ANP senators would also stage a walkout over target killing in the metropolis.

After the Senate session, Senator Haji Adeel of the ANP told media that law and order could not be established in the city without a military deployment, adding that an indiscriminate operation against criminal elements in the country’s financial capital was necessary. Adeel said Karachi also needed to be rid of illegal arms.

The Senate unanimously passed Fair Trial Act 2012 to provide legal framework to agencies to lawfully conduct surveillance of suspected terrorists. Law Minister Farooq H Naek presented the bill. He told the Senate that by enactment of this law all the law enforcement and intelligence agencies will be governed by a uniform legal system for collection of evidence, which will be admissible even if collected prior to the registration of an FIR.

“The law must encourage investigation, intelligence agencies to only collect genuine evidence in accordance with law and thus curb the temptation of planting false and fabricated evidence against individuals in violation of their human rights due process and civil liberties” he said. He said the investigation agencies lack the comprehensive legal powers to collect evidence through surveillance or interception, although such legal cover is available to intelligence agencies in several other jurisdictions to pre-empt and prevent acts of crime or terror. – DailyTimes