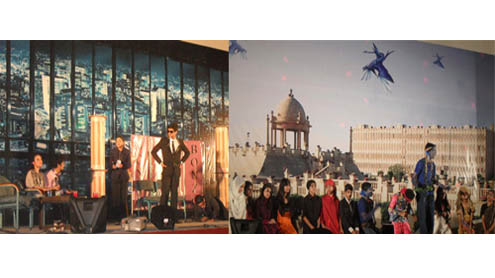 KARACHI: The first day of the Beaconhouse Annual Drama Festival concluded successfully with sophisticated performances by the school students on Thursday at the Bahria Auditorium in Karachi.

More than 60 O’level students of five Beaconhouse schools – Jubilee, Gulshan Cambridge, North Nazimabad Cambridge, Defence and PECHS Campus – participated, with each branch presenting a 30-minute English theatre production.Students performed on a number of diverse themes. ‘The Conspiracy’, presented by Jubilee Campus, was co-authored by BSS student Radhya Kareem and teacher Tahira Zaman. This was a comical suspense play depicting the social chaos on security issues. The story revolved around agent Thames, Bonzo (the gangster) and the media, and how their individual pursuits unfold into a comedy of errors.

Pete Benson’s ‘Crossing the Line’, performed by students from Gulshan Cambridge, was the story of how a bunch of teenagers come across and interact with a murder convict, subtly touching on the theme of the importance of good childhood development and experiences.The team from North Nazimabad showcased ‘The Man Who Came To Dinner’ by George S Kaufman and Moss Hart, which was adapted by Beaconhouse teacher Razi Imam. This depicted the timeless theme of the impact of fame and wealth on a people’s personalities and behaviour.

PECHS Campus chose a local theme – the daily life of a Karachiite – in ‘The Resilient’ written by students Amna Khalid and Niaz Ahmad. It talked about how people in Karachi are surviving against all odds.Meanwhile, the Defence Campus team performed on ‘Avatars in Pakistan’, written by teacher Javed Ali. This was a unique story based on Avatars landing in the middle of Karachi, with the broad theme being the power of the pen.Prominent media personalities, Nida Butt and Naila Jaffery, graced the occasion as part of the judges panel. Students won in the categories of Best Actor (from each play), Best Production, Best Direction, Best Art Design, Best Play and Best Actor of the Day.

Students prepared extensively for the theatre festival with the help of external tutors and their teachers. Beaconhouse also arranged drama workshops for students and teachers, conducted by well-known theatre personality, Sohail Malik. BSS students were actively involved in the production, direction, costumes, set designing, preparation of props and sound effects etc. for the plays.The second day, 8th February 2013 of the theatre festival, will present performances by A’level students. – DailyTimes