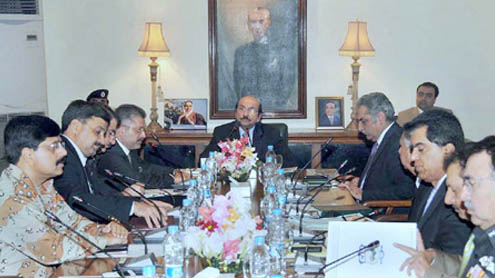 A statement said that the chief minister stressed upon police, rangers and law enforcement agencies to have constant vigilance and strict as well as prompt measures to curb the menace of terrorism, killings, extortions and kidnapping for ransom.It said that he clearly directed to take proactive action and clear the affected areas of criminals, terrorists and anti-state and anti-people elements and crush and eliminate their activities.

The CM said that no excuse would be accepted and there was an acute need to deliver the results and drastic action be taken across the board without consideration of political, ethnic or affiliation with any school of thought.He directed that if more police force was required to cope with the situation, it might be called from various districts of interior Sindh and that stern action be immediately initiated against criminals, terrorists and anti-state elements.

Shah maintained that peaceful people wanted practical results, as it was the responsibility of the government, police, rangers and law enforcement agencies to maintain law and order in the province, particularly in Karachi.He asked the law enforcement agencies to perform their duties more effectivelyand increase the police/rangers patrolling. He made all DIGs
of Police responsible to control the law and order in their respective areas and hoped that stern action would be jointly undertaken by police and rangers, so as to normalise the situation in Karachi.

He said that it was the task of police, rangers and LEAs to make the affected areas of  Karachi clear of terrorists, extortionists, criminals, as those elements wanted to destabilise the government on one hand and appear to get general elections postponed on the other, but the government would follow the Constitution, as elections were being held on
schedule as per the Constitution.

On the occasion, Sindh Information Minister Sharjeel Inam Memon, Sindh Chief Secretary Raja Muhammad Abbas, IG Police Sindh Fayyaz Ahmed Leghari, AIG Police Karachi Iqbal Mehmood and others discussed the issue in details and briefed the meeting about situation prevailing in Karachi.They suggested evolving a joint strategy, so as to combat the situation and restore peace at all costs. – DailyTimes