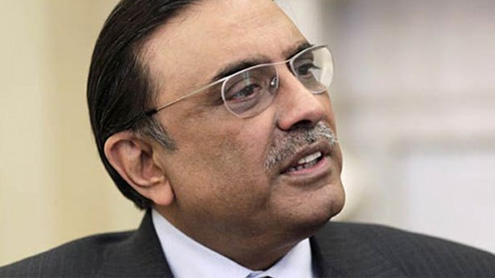 According to an official press release, the president said there would be no operation against the marchers and expressed the hope that Dr Qadri and his followers would remain peaceful.The statement came after a fresh deadline was given to the government by the Tehrik-i-Minhajul Quran for the fulfillment of its four demands and Interior Minister Rehman Malik issued an ultimatum and asked Dr Qadri and his followers to leave Islamabad.

Otherwise, he said, a ‘targeted action’ would be carried out at an appropriate time. But the minister rejected the possibility of a full-fledged operation.“I have four different intelligence reports that the TTP wants to attack Dr Qadri and his people. So please call off the sit-in to save the lives of the children and women who are there with you,” he said at a late-night press conference.“If something happens, you, Qadri Sahib will be responsible for it,” he said.

The minister said a case would be registered against Dr Qadri and members of the committee of his organisation for violating the law. “I have sent the draft of the FIR to the law division for legal opinion,” he said.Mr Malik said it had been decided that no ‘operation’ would be conducted but targeted actions would be taken to send Dr Qadri away from Islamabad.“My leadership has ordered me to avoid any operation for the sake of the lives of children and women in the sit-in but targeted action can be conducted anytime. It may be tonight, tomorrow or the day after,” he said.

The interior minister read out four intelligence reports saying that the banned TTP and some other terrorists groups had planned to attack Dr Qadri in the Blue Area.“Groups of Saifullah Baqi, Jundullah, the TTP and Tariq Gidar have sent their suicide bombers to Islamabad to target Dr Qadri,” he said.Mr Malik said he had more than 15,000 security personnel, including police Rangers and Frontier Constabulary, to conduct any operation but he would not go for it and only a targeted action would be taken to get Dr Qadri.

On the other hand, followers of Dr Qadri raised their sticks after hearing about Mr Malik’s ultimatum.Soon after the press conference, people at the sit-in formed a human chain around Dr Qadri and his bullet-proof trailer to foil any attempt by police to arrest him. “We have information that the government will try to arrest Dr Qadri and we are ready to repulse any such action,” a leader of the Tehrik told Media.The minister said he had some options other than an operation to get Dr Qadri, adding that he could send the leader of the march out of the city within five minute. “I have my people among your followers who can hold you anytime,” he said.

“We have latest equipment and gadgets, like anti-riot gas that makes people unconscious for two hours. Another spray makes people blind for some time,” he said.Information Minister Qamar Zaman Kaira also ruled out an operation. “We have no such plan but we request Dr Qadri to send the women and children back home from the venue,” he said.“We believe that peaceful protest is a right of every citizen but it should not create problems for other people,” he added.

Mr Malik also said that the diplomatic community was safe and their security had been beefed up.Later, he invited Dr Qadri for talks with the government for a logical conclusion of his protest. “He should form his team and tell us with whom he wants to talk — with the prime minister or any other person,” he said. – Dawn