Qadri warns rulers to step down, dissolve assemblies till tomorrow 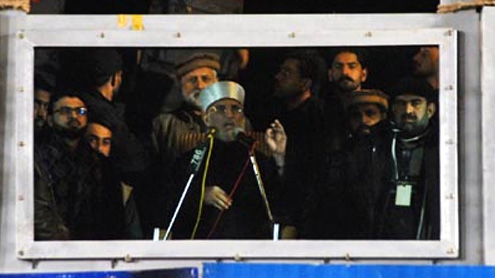 Qadri warns rulers to step down, dissolve assemblies till tomorrow

ISLAMABAD: Leader of Tehreek-e-Minhajul Quran Tahirul Qadri has warned the rulers to step down and dissolve the assemblies till tomorrow at 11:00 am, otherwise, the people would themselves announce it.

Addressing the participants of long march, the purpose of long march is rule of law, and the establishment of true democratic government.He said the long march ended and the process of revolution started. He said that he would not address the participants here but in front of the parliament house.He said that the stage would be shifted from here to the parliament house.He invited President Asif Ali Zardari, Prime Minister Raja Pervez Ashraf and the cabinet members to come and see the sea of masses. He used the world ‘former’ for the President and the ministers. He appreciated the role of media.

He said that he has come with the Hussaini mission. He took oath on Quran from the participants that they would not leave the venue till his orders.He urged the participants of long march to stay till the acceptance of demands.He said that he would announce decision and would also get it implemented. He said that the government would have no option but to accept all the demands.He saulted the people for participating in such large number in the march and said that their struggle and sacrifices would bring positive results.

Earlier, he was warmly welcomed by his sincere companions and party workers who were anxiously waiting for him at the site which had been arranged for address of their loved leader.Party workers also threw rose petals on Shikhul Islam who had ignited a ray of hope in the hearts of millions of people against the cruel and brutal system which has been sucking the blood of the masses in the name of so-called democracy.According to sources, Islamabad’s deputy commissioner and local leaders of the Minhajul Quran had reached an agreement to allow Qadri and his convoy to enter the federal capital.

Moreover, the federal government has also released rupees 50 million for the expenses to be incurred to ensure security for the rally.Tahir-ul Qadri, a Pakistani-Canadian who returned to his homeland last month after years in Toronto, accuses the government of being corrupt and incompetent, and says polls cannot be held until reforms are enacted.He claimed on Monday to be leading one million people into Islamabad, where they will camp out on the streets until their demands are accepted.

But the significance of the rally will likely hinge on turnout, whether there is any violence at the gathering and to what extent the protesters are able to penetrate Islamabad, where shipping containers have been used to seal off the main approaches.Witnesses estimated that tens of thousands of people had joined the rally by the time it reached Jhelum, 120 kilometres (75 miles) south of the capital.In Jhelum, an AFP reporter saw men, women and children carrying Pakistani flags and piled onto the rooftops of buses, flashing victory signs as part of a five-kilometre convoy of cars, trucks, motorcycles and other vehicles.

Anthems blasted out of loudspeakers as protesters danced to drumbeats and residents lined both sides of the road, showering the crowd with rose petals, a traditional welcome in Pakistan.Qadri wants an independent caretaker government to be set up in consultation with the military and judiciary when parliament disbands in mid-March, and is calling for reform so that “honest people” can be elected at polls due by mid-May.”Come out of your homes to save Pakistan, save the future of your children, save your religion, save the honour of the country in the comity of nations, save the country from robbers, thieves and corrupt rulers,” he said.

If held on schedule, the election will mark the first democratic transition of power between two civilian governments in Pakistan s 65-year history, which has been marked by bloodless coups and extensive periods of military rule.Mainstream politicians fear that Qadri s demand for the military to have a say in the caretaker set-up could be a ploy by elements of the establishment to prolong the interim administration and delay elections.Interior minister Rehman Malik has repeatedly warned that the terrorist could launch an attack on the march.

Thousands of security officers deployed in Islamabad to help protect government and diplomatic areas as hundreds started to gather in the city.Many of those taking part in the protest are long-standing followers of Qadri and activists in his Tehreek-e-Minhajul Quran movement, which has a network of religious and educational institutions in Pakistan and all over the world.”We are following him for bringing change into our country. We will stay in Islamabad till change comes,” said Faiza Iftikhar, a coordinator in the organisation from the industrial city of Faisalabad.

Unemployed Mohammad Khan, 50, from the town of Gujar Khan said he was not a member of the movement, but had joined the protest because he wanted change.”I want justice in the society and it will come through change,” he said.The convoy left the eastern city of Lahore on Sunday for Islamabad and police say thousands of officers have been deployed along the route of the march, including more than a dozen police vehicles guarding Qadri.Mobile phone networks have been shut down en route, a precaution designed to stop the terrorists and other militant groups detonating bombs.

The Tehreek-e-Minhajul Quran long march led by Dr Tahirul Qadri has reached Islamabad and held a sit-in.Strict security arrangements were made along the route of the long march and mobile phone services have been suspended in Islamabad.A large number of people gathered at Jinnah Avenue to welcome the Tahirul Qadri-led march. A big number of youth was present in the participating crowd while many women had also turned up at the show, some of them with their kids.The charged protestors were carrying national flags and palacards were in a festive mood and chanting slogans for bringing about a change in the country.

The crowd had brought drinking water, edibles and other essentials along with them to make out on the roads of the Federal Capital in a chilling weather. They were ready to stand behind their leader Tahirul Qadri for as many days as it takes to push for their demands.Tahir-ul Qadri, who returned to Pakistan last month after years in Toronto, accuses the government of being corrupt and incompetent, and says polls cannot be held until reforms are enacted.He claimed to be leading one million people into Islamabad, where they will camp out on the streets until their demands are accepted.

“We will stay in Islamabad until this government is finished, all the assemblies are dissolved, all corrupt people are totally ousted, a just constitution is imposed, rule of law is enforced, and true and real democracy is enforced,” Tahirul Qadri maintained.Despite the volatile law and order situation across the country and ignoring the threat of a terror strike, as claimed by the Interior Minister, the people have taken to the streets in huge numbers, forming a massive rally.Tahirul Qadri had made three main demands to the government: reconstitute Election Commission of Pakistan; install impartial and honest caretaker government and; implement Article 62 and 63 of the Constitution which deals with the determination of eligibility of an electoral candidate.