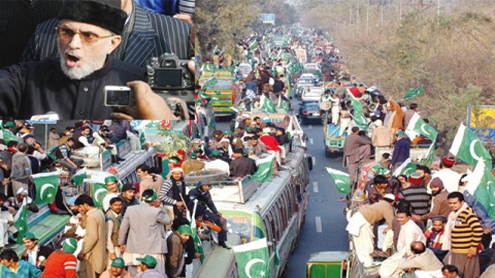 LAHORE: Dr Tahirul Qadri’s march on Islamabad finally began from Model Town on Sunday afternoon with a delay of over five hours, allegedly caused by the hindrances created by Punjab government.

Thousands of Minhaj workers including women and children gathered outside Dr Qadri’s residence in the morning. Boarding hundreds of buses, trucks and cars, they left Model Town after Zuhr prayers instead of 9am as the administration, citing security concerns, had changed the route at the eleventh hour.The caravan was scheduled to spend night in Gujrat and then leave for Islamabad in the morning. It was the second long march on the capital from the Model Town during the present regime as the ruling PML-N had previously led a march from here for restoration of deposed judges.

It being a weekly holiday, the city roads were almost deserted. Police was only deployed along the march route, around the Tehrik Minhajul Quran (TMQ) secretariat and Dr Qadri’s nearby residence.Before departure, the organisers kept announcing that administration was blocking roads and had impounded their vehicles, besides doing whatever possible to stop the people from other cities to reach Lahore and join the march.

The initial procession comprised around 200 bigger and 150 smaller vehicles. A crane, for removing expected blockades, two tankers of petrol and one of diesel, and two containers of toilets for ladies and the elderly accompanied the caravan. Also, there were trucks and pickups containing food, water, gas cylinders, beddings, quilts and other necessities.After change in the route, the marchers headed to Shahdara and reached there after Maghrib prayers where activists of Majlis Wahdatul Muslimoon (MWM) welcomed them and gave them way to proceed towards Islamabad. MWM activists had blocked GT Road at Imamaia Colony to protest against the killing of over a 100 people from Hazara community in Quetta.

Qadri had originally planned to visit Data Darbar before heading for Islamabad but roads to the shrine were blocked. The caravan was also to pass through The Mall but it could not happen due to ongoing MWM sit-in outside the Governor House.The caravan reached GT Road at Shahdara after passing through New Campus Bridge, Canal Bank Road, Dharampura, Garhi Shahu and Minar-e-Pakistan where people in groups joined it. Besides police and rangers, TMQ security guards were also deputed for security. Mobile service was also suspended in areas along the march route.

Travelling in a separate convey of bullet proof jeep and container equipped with basic facilities, along with six vehicles of Elite Force and the one equipped with mobile phone jammer, Dr Qadri set about half an hour later and joined the main caravan after it had crossed Minar-e-Pakistan.Speaking at a press conference before leaving, Dr Qadri blasted the federal and Punjab governments for ‘creating hurdles’. Terming it a ‘democracy march’, he vowed to continue struggle for supremacy of the constitution and the rule of law. He also demanded immediate dissolution of Balochistan assembly and removal of provincial government for its failure.

“It is a march for democracy, against looters and plunderers sitting in Islamabad and Lahore and against those exploiting the poor. It is a march against the oppressor, the corrupt and the persecutor of the weak and the poor. It is a march for the people sobbing in Quetta with around 150 dead bodies of their near and dear ones.”Dr Qadri accused Punjab government of harassing Minhaj workers and seizing hired vehicles. He said police even snatched 10 vehicles assigned for his personal security and 20 vehicles for the media. He said all the cities were blocked to stop people from joining the march, but vowed “the long march will take place even if they have to travel on foot”.TMQ chief alleged the federal government had placed tankers filed with acid and gas in the federal capital and had dug ditches filled with explosives. He said that the ‘Yazeedi forces’ would be wiped out forever with the help of the Almighty. – Nation