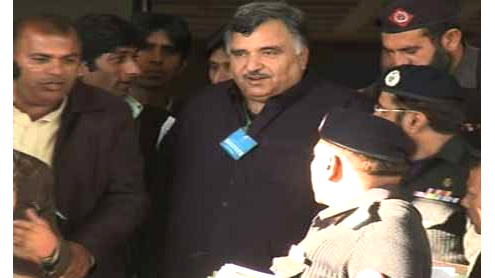 Abdul Hazfeez Pirzada represented Sikander Jatoi before a three-member bench headed by Chief Justice Iftikhar Muhammad Chaudhry and prayed to the court to extend one-day protective bail, granted by Lahore High Court for appearing in the apex court. He said his client should not be arrested until he arrived in Karachi.Rejecting the plea, the chief justice said: “The SC did not issue notice for his appearance, he has to cooperate with the police and we cannot give any further relief to him.”

During the hearing of another case earlier, Pirzada informed the court that Sikander Jatoi was present in the court and police wanted to arrest him. “My lord, I request you to grant some relief to my client so that he could reach Karachi tomorrow and he will cooperate with police,” he pleaded. Sikander Jatoi is accused of helping his son Shahrukh Jatoi fleeing the country.The Supreme Court had ordered that all accused in the case be arrested until Thursday. Sindh Advocate General Fateh Malik informed the court that Interpol had confirmed Sharukh’s presence in the UAE.

Expressing displeasure at this, the chief justice asked DIG Shahid Hayat why court was misinformed that he had not left the country. “You have misled the court and intentionally provided space to the culprits from the day one and you did not have any interest to nab the accused,” he maintained.The DIG said that they had checked all flights records, PISCES (Personal Identification Secure Comparison and Evaluation System) at all the airports as well as roads but there was no clue of his departure. “We don’t know how he went out of the country.”

The chief justice remarked ‘he left on special plane’.The DIG went on to add that the FIA was investigating the matter as to how Shahrukh has left the country with fake identification. He said it was police pursuit that made Sikandar Jatoi appeared in the court.The chief justice said why the police did not put the pressure on accused as soon as the case was registered, adding that you should have taken action much earlier. “It is not only in Shahzeb’s case but police is not interested solving any case.

The chief justice asked why action was not taken against DSP Wasim Khawaja, a taxation officer who was reportedly posted on the recommendation of some influential person, who did not care for the murder of a 20-year-old boy. Shahzeb Khan was gunned down in the Defence area of Karachi on December 25. Siraj Talpur and two others were taken into police custody, while Shahrukh Jatoi fled the country and is in Dubai.A police team went after him.The court adjourned the hearing until January 16, directing the police to arrest Sharukh Jatoi before next hearing. – Nation