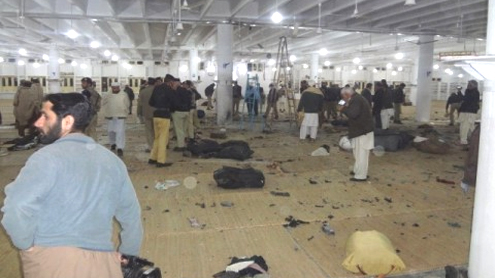 PESHAWAR: At least 22 people were killed and 87 others were injured in an improvised explosive device blast in a mosque in Swat on Thursday.

The blast targeted a mosque on Takhtaband Road on the outskirts of Mingora town.While initial reports were unable to confirm the nature of the blast, Bomb Disposal Squad (BDS) official Qayyum Shah confirmed that a bomb, in the shape of an improvised explosive device, was planted inside the mosque.According to details, the members of Tableeghi Jamaat gathered in the mosque to attend weekly gathering held every Thursday after Maghrib prayer but turned out to be the victims of the explosion. An assistant sub inspector of police is also among the dead.

“The death toll may rise as some of the injured are in critical condition and we are receiving more and more injured people,” said Dr Niaz Mohammad told a foreign news agency.Police had earlier said that the Swat blast was caused by an exploding gas cylinder but many of those present said they doubted that. The explosion took place at a weekly meeting of the local Tableeghi Jamaat at its centre on the outskirts of Mingora, regional police chief Akhtar Hayat said.“According to initial reports it was a gas cylinder blast,” another senior police officer Gul Afzal Afridi said.

“The death toll has gone up to 22,” local administration chief Kamran Khan told reporters at the Tableeghi centre. He said 87 people were wounded, 20 of them are in serious condition.Police officer Afridi said 1,500 people were listening to the speech of a cleric when the blast occurred.“There was no cylinder where the blast took place. We all know that gas cylinder does not kill so many people,” said one of the injured, Mohambar Khan. Another injured man also said no gas cylinders were nearby.If the blast was a bomb, the death toll would have been the highest on one day in Swat for more than two years.

“We have received 21 bodies from the site of the blast,” Dr Jamil, In-charge Casualties at the Mingora DHQ Hospital, told a TV channel.The area was once under the control of militants and had set up checkposts before the army undertook an operation in 2009 to rid the area of Taliban-linked groups.Takhtaband road, which is the main link road in the region, was the site of several suicide blasts and attacks on military personnel during the operation.

The religious centre, however, is known to belong to the Tableeghi Jamaat (congregation for spreading faith), which is not linked to any militant organisation.Internationally renowned schoolgirl campaigner Malala Yousafzai was shot in the head in Mingora last October in an attack claimed by the Taliban. She is now recovering and undergoing further treatment in Britain.The Taliban seized much of Swat between 2007 and 2009 insurgency but the army declared the region back under control after an offensive in July 2009. – Nation