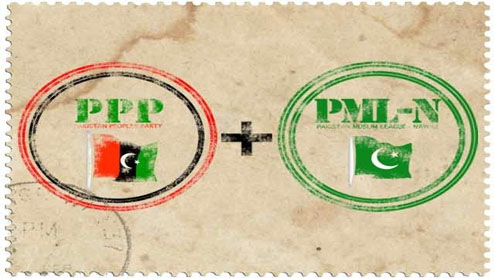 LAHORE: In response to the prevalent quest for general elections and subsequent democratic transition, the ruling PPP and the main opposition PML-N are inching closer to firm up the name of a caretaker prime minister with unimpeachable democratic credentials, said the sources close to the teams negotiating this all-important matter.

The sources said the names so far short listed for this coveted post by the two sides include only those who are considered to have strong yearning for the perpetuation of the democratic system in the country and acceptable to all, even those not represented in parliament as well as in the negotiations due to the constitutional compulsions. The sources said it is highly likely that the caretaker prime minister would be from a smaller province but with a great acceptance from all democratic forces.

“The name of caretaker prime minister would be made public only after the ‘intimidating’ threat of the so-called ‘Tahrir Square’ in Islamabad on January 14 seen considerably defused,” said the sources, which added, “This high-drama was being staged only to influence the process of the selection of a caretaker prime minister.” The sources said the negotiating teams headed by federal minister Syed Khurshed Shah of the PPP and Senator Ishaq Dar of the PML-N were keenly observing the moves of Tahirul Qadri of Tehreek-e-Minhajul Quran (TQM), which are said to be aimed at subverting the constitutional mandate of the two parties for the selection of a caretaker prime minister.

The sources said the individuals involved in the exercise of selection of a caretaker prime minister believed to have cautious of the possible reservation of the Pakistan Tehreek-e-Insaf in this regard. The sources said the PPP and the PML-N teams are appreciative of PTI chief Imran Khan’s current posturing for putting his weight behind the continuation of the democratic system than derailment of the democratic process through subversion of now an in sight general elections.

A senior PML-N leader from Lahore said the party recognised PTI’s gesture and would like to reply in the same coin by nominating a person of his liking for the office of caretaker prime minister. The PML-N leader said the PTI appeared to have refused the temptation of getting into power through back door and proved as wrong those doubting his democratic credentials on the basis of his past political record.

The PML-N leader revealed that at some level the PTI was on board in the process of selection of caretaker prime minister, though not at the level between his party and the ruling PPP. The PML-N leader said efforts are being made to keep TMQ as politically isolated as it was getting with the nearing of the so-called January 14 march to Islamabad from Lahore. “No undemocratic methods would be applied to defuse the TQM march as it is bound to die down sooner rather than later,” said the PML-N leader, while adding that “even those political and so-called religious parties which happened to be acting in liaison with the establishment were opposing the march.’

The sources in the PPP, on the other hand, believe that MQM’s honeymoon with Tahir ul Qadri would soon be over with the bound-to-fail TQM-led “Tahrir Square”. The sources said all arrangements to foil the TQM “Tahrir Square” are in place and the federal government is working in close liaison with the Punjab government from whose capital, Lahore, the march would proceed to Islamabad. – DailyTimes