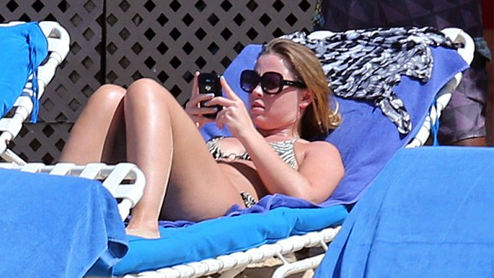 She was once known as ‘the curvy one’ from Girls Aloud.But it seems Kimberley Walsh is the latest Strictly Come Dancing contestant to reap the physical benefits of a gruelling ballroom regime.

The singer looked distinctly lithe as she enjoyed some winter sun on holiday in Barbados this week.Wearing a zebra-print bikini, she showed off her toned legs and washboard stomach as she walked across the hot sand.Miss Walsh, 31, came joint second in Strictly with Denise Van Outen, who also showed off a trim new physique during a recent family holiday in Dubai.

Other contestants to benefit from the ‘Strictly effect’ include contestants Fern Britton and Lisa Riley, who said she lost more than a stone on the show.However, Miss Walsh recently denied she had lost weight, insisting her body was simply more toned than before.She said: ‘My bum’s lifted slightly. I can see some liftage going on. I’m definitely not losing any weight, but I’m toning up, which is fine by me.‘I can definitely see a difference.’She added: ‘I can see my body changing, which I’m happy about.

‘I can see it on my legs, I’m getting more shape in my things and my knees are a bit tighter.’Miss Walsh has always been proud of her curvy figure. In 2011, she said she exercises extra hard just so she can eat more.She said: ‘I don’t calorie count. That’s what I love about working out.‘It sounds really bad, but I work out so I can eat – it’s true! I just can’t diet to that extent. I need to be able to have pasta now and again.‘I like bad food that’s not that unhealthy – stuff like pasta. And I do like sweet things so I have to have chocolate a couple of times a week.’

Miss Walsh was joined on holiday by her boyfriend Justin Scott.Despite dating him for nine years, she said they have no plans to get married in the near future.She said: ‘In this industry, people assume that if you’re together more than a year then you’re going to get married.But we don’t take on the pressure of the outside world; we know where we’re at in our relationship. Besides, I think being together nine years is almost a marriage in itself .’ – DailyMail