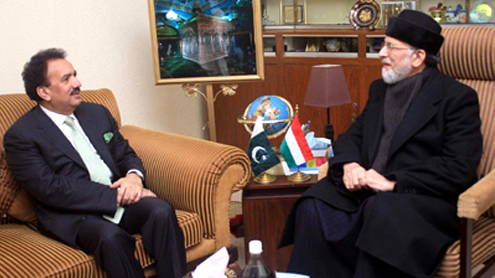 ISLAMABAD: Taliban militants have threatened to attack a rally for election reforms, to be held in Islamabad next week, interior minister Rehman Malik said Monday.

Chief of Tehreek-e-MinahajulQuran Tahir-ul Qadri, vowed last month to lead a “long march” protest on the capital from Lahore if the government fails to begin electoral reforms within three weeks.”Tehreek-e-Taliban Pakistan (TTP) has threatened to attack the long march,” Malik told reporters in a joint press conference with Qadri.”But we will not stop the long march and (we will) provide them full security,” Malik said.

TTP spokesman Ehsanullah Ehsan however denied the group had threatened to attack the protest.”This is not true, we have not issued any threat to attack the long march,” Ehsan told AFP by telephone from an undisclosed location.”We have no comments for the long march,” he added.Qadri vowed he would not waiver from his mission to stage the protest.”The long march will take place on January 14, In sha Allah, and it will remain peaceful,” Qadri said.”Our mission is to strengthen democracy and pave the way for free and fair elections as enshrined in the constitution,” he said, adding that he was opposed to any delay in the Pakistani elections due in May. – Brecorder