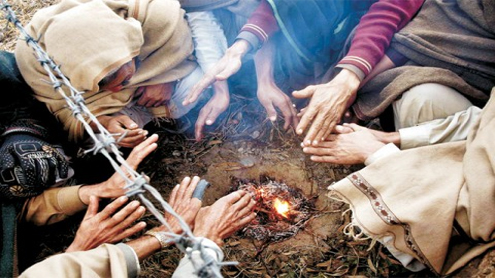 In some parts of the twin cities, the visibility dropped to near zero around 09:00pm. “A spell of rain, starting from January 11 (Saturday), is expected to hit the upper parts of the country, which would help normalising the weather,” DG Met Department Dr Hanif said.On Monday, the Motorway was closed from Islamabad to Kalar Kahar around 07:00pm as thick fog covered the federal capital and adjoining areas on Monday. According to a handout issued by the Motorway police, there is a dense fog from Peshawar to Rashkai and Burhan to Islamabad, adding that the visibility range is almost 30 to 60 kilometres.

The police said that the visibility range from Hassan Abdal to Islamabad was 10 kilometres and from Rawalpindi to Jehlum is zero to 10 kilometres. While on GT Road, the visibility from Lahore to Okara is 50 to 100 kilometres.Dr Hanif said the current severe cold wave continuing in different parts of the country has broken record of last fifty years. He said that temperature drops even in the day time in various cities and plain areas by six to eight degrees due to dense fog.

He said these cold waves will persist in the country till Saturday and the current wave of fog is going to continue in upper Punjab, KPK and Rawalpindi-Islamabad. He said upcoming spell of rains will decrease the temperature in the country while 80 per cent areas of the country are in the grip of cold waves.He said in Potohar region, maximum temperature has fallen to 14C from the normal 18C and similar situation is prevailing in Khyber Pakhtunkhwa.

Meanwhile, routine life in Rawalpindi division came to a halt because of dense fog and cold wave, hitting road, rail and air traffic badly. Met Office said the minimum temperature in the city was recorded 0 degree Celsius while maximum temperature was 12 Celsius, predicting that the fog would continue enveloping the plains for next 7 days with severe cold weather. Zero visibility prevailed during the night and in morning due to heavy fog.

According to details, thick fog enveloped the twin cities of Rawalpindi and Islamabad on Monday evening causing massive disturbance to traffic flow on roads, on railway tracks and flight schedule. The authorities closed down Benazir Bhutto International Islamabad Airport (BBIIAP) for the flights, sending scores of passengers back to their homes. Severe cold wave and foggy weather have also disturbed normal routine life by hampering vehicular movement on roads causing a massive traffic snag across the city. A thick fog stranded vehicles at GT Road while National Highway and Motorway Police officials continued to guide the road users.

Taking advantage of the worried situation, the dealers of wooden fuel and coals increased the prices of the commodities causing immense troubles for the citizens. Tens of thousands of school, college and university students, office goers, laborers and people belong to other walks of life also facing problems due to fog and bone sizzling cold in the morning. The business of soup, dry fruits, tea, pakora samosas and coffee got momentum in the city as huge rush of people could be witnessed around the shops.

Meanwhile, as the capital continues to remain in the grip of harsh cold wave, seasonal and cold related health problems have increased and to prevent them health experts suggest remaining cautious and taking preventative measures. According to Pakistan Institute of Medical Sciences (Pims) spokesperson Dr Waseem Khawaja, the number of patients with complaints of chest infections, asthma, skin allergies, flu and fever have been increased from 5 to 10 per cent in outpatient departments of the hospital.

‘Children, older people and people with low fats are more prone to such health problems. During winters to avoid seasonal ailments, intake of fluids, soup, honey and water should be increased. Before the start of the season anti-allergic can also be take with the consultation of physicians to avoid allergies and asthma attacks. During an asthma attack, people need to take Bronchodilators drug that quickly opens the airways of lungs to make breathing easier’, he suggested.

With the advent of winter, there had been a significant increase in upper respiratory tract infections among children. Diseases like pneumonia, bronchiolitis, asthma, flue and measles have increased due to winters, informed Assistant Professor at Pims Children Hospital Dr. Maqbool Hussain.Asthma that is a winter disease is very common among adults and children alike. The usual symptoms of asthma among children are coughing, shortness of breath and vomiting after feeding. The symptoms are more or less same among children and adults, he added.

‘Parents should protect their children with warm clothes, take care of their diet, cleanliness and neatness. They should not be given market food. Usually, in theses days people go to see snowfall to Murree and take their children with them too, thus, exposing them to extreme temperature that must be avoided’.Polyclinic Hospital Spokesperson Dr Sharif Astori also maintained that the number of patients coming with seasonal diseases had increased and among them majority were children and older people. Mostly patients were coming with complaints of chest problems, flue, asthma and high-grade fever.

‘Children mostly do not care about them and easily get affected by the severe weather conditions so parents should take care of them.  Parents should take care of them in three months of December, January and February, especially in the morning and evening. Chest and face should be protected from cold and exposure to dust should also be avoided’. He said measles also increases in winter season because people usually tend to stay indoor and sit around heater in a room that dry up indoor humidity.He advised that to maintain humidity level in the room people should put water on heaters and ensure routine immunisation of their children to prevent various child diseases. – Nation