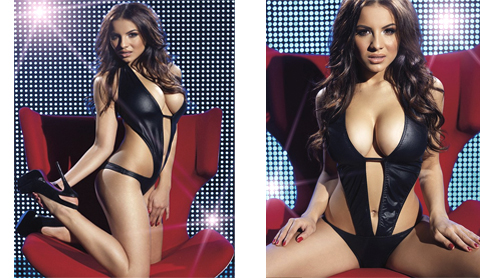 Lucy Banghard’s second name is arguably fitting for a woman who uses her sex appeal to interest readers in lads’ mags.

But the Bedford-born model is not afraid to use it to launch her own business after she leaves the Celebrity Big Brother house.Lacey said: ‘I want to capitalise on my name a bit more. Banghard would be a great name for my own brand of condoms: “Banghard, bang safe”.In an interview with Nuts magazine, Lacey said that she has watched the reality show for years and especially liked the 2005 series starring a certain Hollywood actor’s mother.The 20-year-old enthused: ‘I loved the series with Sylvester Stallone’s mum, Jackie. She was hilarious.

‘I’d love to be in with someone crazy like that.’Being in front of the camera 24 hours a day obviously means the celebrities end up sharing more of themselves than they might want to.But Lacey said that the biggest discovery viewers would find was on her feet: ‘ I have a massive big toe!”My brother calls me “Toe-bo Cop” or “Toe-tanic” ‘, the Page 3 girl said, ‘I think it’s to balance out my massive boob – or else I’d fall over!’Thankfully, the slight abnormality didn’t prevent Lacey from entering the house.And it turns out YOLO was the reason why she decided to join Celebrity Big Brother in the first place.The glamour model said, ‘At first I was terrified about it but then I started to think.‘’Why not? You only live once, right?’ – DailyTimes