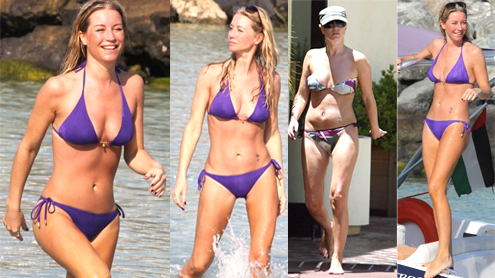 Fern Britton lost weight and toned up her figure while performing on Strictly Come Dancing.

But it seems she wasn’t the only one. Runner-up Denise Van Outen has also been displaying a distinctly trimmer physique in the wake of months of gruelling training for the BBC competition.Wearing a purple halter-neck bikini, the TV presenter was seen enjoying the sun and sea while on a New Year holiday with family in Dubai.It was certainly a different look to that from 2008 when she seemed decidedly less toned while on holiday in Los Angeles.

Miss Van Outen, 38, has previously said she works hard to maintain her figure by boxing and going on long walks. ‘I’m happy with my body and feel confident about getting into a bikini this summer,’ she said in 2008.‘Like any woman, there are things that bother me. I could do with losing some weight from the tops of my legs and if I over-indulge I do get a bulging tummy.’

Miss Van Outen – who was partnered with James Jordan for Strictly – was criticised by viewers who thought that her stage school training put her at an unfair advantage against fellow contestants.Fans complained about the mother of one’s West End experience in musicals Chicago and Legally Blonde. ‘Fantastic jive from James and Denise – and so it should be! She’s had plenty of West End experience,’ fashion journalist Hilary Alexander posted on Twitter,

Miss Van Outen flew to the United Arab Emirates with her parents and daughter Betsy, and saw in 2013 at a star-studded bash.Meanwhile, her husband Lee Mead, 31, was seen alone at the Tsunami sushi restaurant in Clapham, south London, heading home before midnight.A spokesman said Mead had to stay behind to finish his pantomime run in Jack And The Beanstalk at the Mayflower Theatre in Southampton. – DailyTimes