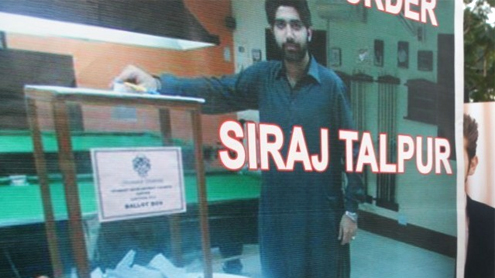 Siraj Talpur, a prime suspect in Shahzeb Khan murder case, claimed that he did not shoot the 20-year-old, but it was Shahrukh Jatoi who had fired the rounds, reported Media on Sunday.

Siraj was apprehended from rural Sindh on Saturday and has been in police custody along with his brother Sajjad Talpur since then.During initial investigation, Siraj said that Shahzeb and Shahrukh’s worker Murtaza Lashari had gotten into an argument after which Shahzeb slapped Lashari several times. He said that the argument was soon sorted out but Shahrukh shot Shahzeb multiple times when he later went out that night.

Siraj also agreed to be a state witness to the case, and said that he has not been able to sleep since the incident. He added that he has not been in contact with Shahrukh since he fled to rural Sindh and was hoping that Shahrukh’s father Sikandar Jatoi would save him.The arrested suspects – Siraj, Sajjad and Lashari – are due to be presented in court tomorrow. The other two suspects in the case, Shahrukh and Sikandar, are still on the run, while the federal government has cancelled their passports.

Shahzeb was shot dead near his home in Defence last year. A popular student and son of DSP Aurangzaib, Shahzeb’s murder created an uproar in civil society.The Supreme Court took suo motu notice of the case after the news spread that influential people were creating hurdles in the arrest of the suspects.In its first hearing, the police were ordered to arrest the suspects within 24 hours or risk losing their jobs. – Tribune