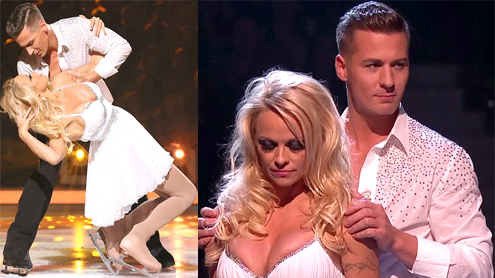 An embarrassed Pamela Anderson was voted off Dancing On Ice on Sunday night after suffering a wardrobe malfunction.

The Baywatch star was put off her stride during her dance-off with partner Matt Evers after her tight dress failed to contain her ample cleavage.Her stumble as she tried to amend her neckline meant the judges decide to save Keith Chegwin and Olga Sharutenko after the couples ended up in bottom two.Although she had performed strongly in her first dance earlier on Sunday evening, her second dance was ruined by her dress issue.

Fortunately for Pamela, the wardrobe team was prepared and she was wearing matching white and silver nipple covers to protect her modesty when her right breast started to escape from the tight dress.Pamela’s exit was a shock to bookmakers Ladbrokes, who had given her 20/1 odds to be first voted out.Although she was in the top half of the leaderboard and Chegwin was at the bottom, her luck didn’t translate to her second dance.For the skate-off, Pamela performed another slow number to Sinead O’Connor’s cover of Sacrifice, following her earlier skate to Emeli Sande’s Read All About It.

After the dance, Pamela admitted she had struggled with her dress, with host Philip Schofield joking: ‘If that happened earlier, you wouldn’t be in the skate-off.’TV presenter Chegwin, who was forced to quit last year’s show after breaking his ribs, performed a new dance to O Fortuna after his earlier skate to D:ream’s Things Can Only Get Better.Following the skate-off, it was up to the judges to decide their fate.Karen Barber said: ‘I’d like to save you both, but the best performance that time was Keith.’Ashley Roberts agreed: ‘Because of the stumbles I’m saving Keith.’ason Gardiner’s third vote for Pamela meant head judge Robin Cousins’ vote was essentially redundant: ‘I’m saving Keith.’

Pamela remained philosophical about it and apologised to her partner: ‘Sad, it was really fun and now I know how to skate a little bit. I feel so sad, sorry Matt, I stumbled, I fell, my boobs fell out.’Following their first performances earlier that evening, all the celebrity contestants had brand new dances ready for a potential skate-off.Shayne Ward and Maria Fillipov were the first to find out they had survived another week, followed by Beth Tweddle and Dan Whiston.Matt Lapinskas and Brianne Delcourt were ecstatic to find out they were through, followed by Samia Ghadie and Sylvain Longchambon.

Week one saw only half of the 12 celebrity contestants taking to the ice.Lauren Goodger, Oona King, Gareth Thomas, Joe Pasquale, Anthea Turner and Luke Campbell and their partners will all skate for the first time next Sunday.Sunday’s live show marked the return of former judges Jason and Karen to the panel, as well the debut of former Pussycat Doll Ashley Roberts, who spent years as a trained dancer before joining the girl group. – DailyMail