It is often said that money can’t buy love.But trying telling that to a wealthy Indian man who splashed out £14,000 on a solid gold shirt in the hope it will attract female attention.

Money-lender Datta Phuge 32, from Pimpri-Chinchwad, commissioned the shirt which took a team of 15 goldsmiths two weeks to make working 16 hours a day creating and weaving the gold threads.It comes complete with its own matching cuffs and a set of rings crafted from left-over gold. 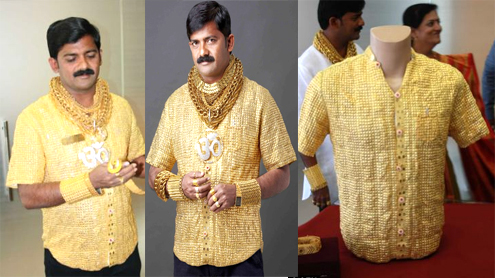 ‘I know I am not the best looking man in the world but surely no woman could fail to be dazzled by this shirt?’ he explained.’The gold shirt has been one of my dreams,’ Mr Phuge told Indian newspaper the Pune Mirror.’It will be an embellishment to my reputation as the ‘Gold man of Pimpri”‘ Mr Phuge said.The gaudy shirt was assembled on a fabric base of imported white velvet, and comes with six Swarovski crystal buttons and an intricate belt, also made of gold. -DailyTimes