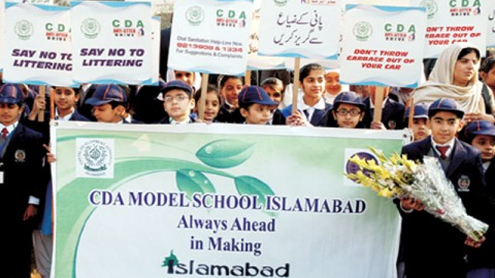 ISLAMABAD: The Capital Development Authority (CDA) on Thursday launched anti-littering campaign commencing from Sector I-9 to keep the city clean and in tidy condition.

Chairman CDA Syed Tahir Shahbaz, while inaugurating the campaign, directed the concerned formations of the Authority to make coordinated efforts and formulate a strategy for implementation of municipal and anti-littering laws in effective manner.He said that wild shrubs, heaps of construction material, encroachments and leaking water poring into the streets are the serious threats to the beauty of the city.

During the campaign, emphasis would be given on sensitising the residents of the federal capital on the issue. Focus will be given to I and G Sectors.A large number of people representing different walks of life participated in the launching ceremony and walk organized in this regard. Children participating in the anti-littering walk were carrying banners play cards to raise awareness on civic issues. Students of the CDA Model School and teachers are playing an active role in the campaign.

The walk was also participated by the Members of CDA Board and other senior officers. Chairman CDA said that anti-littering drive would help raise awareness on cleanliness as well as on environmental issues of the city.He said that the CDA is making all-out efforts to keep the city in tidy condition, however, cooperation of all segments of society is vital to make initiatives of the Authority successful.

He said that the citizens should play their active role and own the city to keep it clean and well maintained. Chairman CDA assured the residents that civic issues like repair and improvement of footpaths, provision of clean drinking water, sewerage, improvement of roads and up-gradation of parks and recreational facilities would be resolved on priority. – Nation