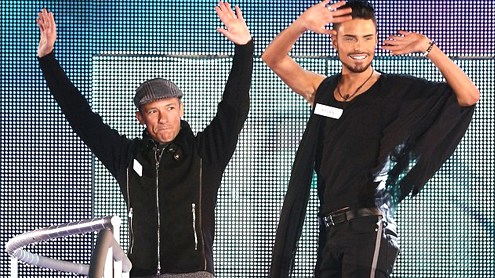 Frankie Dettori and Rylan Clark have found themselves surrounded by a bevy of beauties in the Celebrity Big Brother house after sending six stars to the dreaded basement on Thursday night’s launch show.

After being the first two housemates to greet host Brian Dowling, the 42-year-old jockey and the X Factor reject were told they had to decide who of the remaining 10 contestants would live in luxury in the main house and who would be sent to the relative squalor of the basement.Being chivalrous to the end, the newfound pals sent ladies Tricia Penrose, Gillian Taylforth, Lacey Banghard and Claire Richards to live in the main Celebrity Big Brother house for the next few days.But their charity didn’t extend to Heidi Montag and Spencer Pratt, with Rylan and Frankie electing to send the reality stars downstairs to join Paula Hamilton, Ryan Maloney, Sam Robertson and Neil ‘Razor’ Ruddock in the basement.Frankie was first to enter the house, and admitted he was worried his fiery Italian personality would land him in trouble.

He said: ‘I don’t know if I’m going to be a good housemate. I’m very Latin, I blow hot and cold. I get on with people, I just don’t know if they get on with me.’ Speaking to host Brian Dowling as he entered the house, he said: ‘I’m looking forward to 2013, it’s a new start. I’ll miss nothing about the outside world. I want to win!’The next housemate to enter was Rylan, who said: ‘The thing that makes me the most angry is people who think they’re the b******s. I’m frightened I’ll get p****d and embarrass myself.’

Speaking to Brian, he added: ‘This is so much more nerve-wracking than X Factor, it really is.’After embracing on stage, the pair were immediately charged with the task of deciding which housemates would have to live in ‘hell and squalor’ for the next few days in the Celebrity Big Brother basement.Told by Big Brother they would have to decide instantly which future housemates would live in luxury and who would live in a relative slum for the next few days, the new pals took on their new charge with vigour.

Next up was former model Paula Hamilton, 51, who received the first boos of the night.She said: ‘I had an extremely glamorous and very privileged lifestyle. I found fashion shows in Paris quite exhausting, though. Bad habits in the house? I think I might snore, I’ve been single for so long I don’t know.’It wasn’t long before Paula was joined by Heartbeat actress Tricia Penrose, who glammed up in a sequin floor-length dress.She said: ‘You might know me best as always having the worst dress on at parties. I get slated for everything I wear. I’m either mutton dressed as lamb or too fat.’I’m very easy going, a bit loop da loop and I do like a drink. I’m very easy-going, but don’t get on the wrong side of me.’

But the smiles were soon wiped off their faces when they were told one of them would be heading to the dingy Big Brother basement as part of the first challenge.Rylan and Frankie were told who to decide who they thought would be the most annoying out of Tricia and Paula.Sending the model to the dreaded basement, Rylan said: ‘We’re really sorry to have to do this. I’ll be completely honest, Tricia seems like a right laugh. You can’t really judge on a video but it’ll have to be Paula.’Luckily, Paula seemed to take the decision with good humour, and puffed and panted away as she sat in the squalor of the

Next to join host Brian on stage was Neighbours actor Ryan Maloney, who admitted he has a small problem with flatulence.He said: ‘I’m pretty easy to live with but I do fart sometimes. If people argue, I have been known to egg it on a little bit. I just want to be loved and hugged.’Former EastEnders actress Gillian Taylforth was next on stage, showcasing her slim figure in a slinky red floor-length dress.Visibly shaking, she said: ‘I think I’ll be a good housemate because I love a good chat. I don’t suffer fools gladly and I hate rudeness. I’m very excited about going in, but I’m also nervous.

‘I’ve got used to slapping people in EastEnders. Kathy Beale would just tell people where to go and slap them with a frying pan.’At this point, Rylan and Frankie were told to decide who they thought would be the most fake housemate, and the person who would be next to go to the hell of the basement.With Rylan branding Big Brother ‘bang out of order’ for making them decide between the two, Frankie said: ‘We think Ryan will handle the cold better, so he has to be the one.’Upon hearing his fate, Ryan said: ‘I’m up for a challenge, so bring it on.’

Beaver Falls actor Sam Robertson, 27, and page three model Lacey Banghard were next up.A kilt-clad Sam said rather mysteriously: ‘I’m a proud Scotsman and I hope Scotland will be proud of me… technically I am single, I guess.’Meanwhile, Lacey – who was wearing a see-through dress, added: ‘I spend most of my time in my underwear, I spend more time in my underwear than in clothes.’I’ve got quite big boobs… people judge me from my looks by being stupid. Sometimes I’m a bit ditzy and loud, which can be annoying. But I can be very intelligent, so don’t underestimate me.’