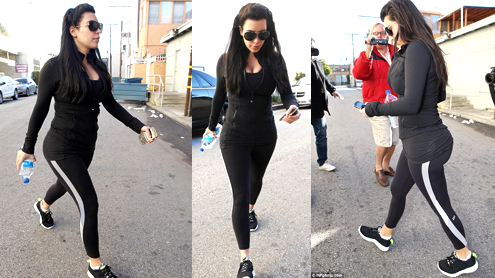 She’s already complained about suffering from growing pains and feeling tired.But Kim Kardashian stuck to her word about ensuring she keeps healthy while pregnant as she headed for a workout session at the gym on Wednesday.

The 32-year-old reality star opted for an all-black outfit – and looked remarkably trim despite being around the three months mark.Kim, who was make-up free, kept her face covered with a pair of large shades and wore her hair partially tied back.Shortly after announcing that she and boyfriend Kanye West are expecting their first child, Kim told E! News that being with child is ‘not fun’ and that she is suffering from ‘growing pains’.Kim, who reportedly earned herself $300,000 when she managed to fulfil her business obligations by hosting a party in Las Vegas on New Year’s Eve, added that although she and Kanye, 35, do not know the sex of the baby yet, they are planning on finding out as soon as they can, according to TMZ.

Kim said: ‘I take lots of naps. Actually I feel really good. This New Year is just about being happy and healthy and that’s what I plan on doing.’I wouldn’t say that pregnancy has been easy but there’s been no morning sickness. When people say pregnancy is fun and they love it, I would disagree. I think from this stage on it does become easier and funner but it’s just adjusting.’She added: ‘Even my sister has made it look so easy and it’s not as easy as people think. It’s a little painful, there’s a lot of growing pains.’But I’ve heard it’s all worth it so I’m looking forward to that.’

And as for any weird cravings, The Keeping Up With the Kardashian’s star said she is longing for seafood – though she knows it’s not encouraged for pregnant women.She said: ‘I’m craving sushi, but I know I can’t really have it, so I’m eating a lot of carrots and celery with lots of ranch.’Kim also doesn’t mind if she has a boy or a girl, and claimed: ‘No preference, I just want a healthy baby.’The Twitter addicted star took to the social networking site to promote her new fragrance but later removed the post.

Kim said she was really ‘excited’ about her new scent but her followers may have though it made her seem too mercenary when she should be thinking about motherhood.She also Tweeted about her beauty line, saying: ‘So excited about our #KhromaBeauty products launching this year!’Look forward to so many things this year!’ – DailyTimes