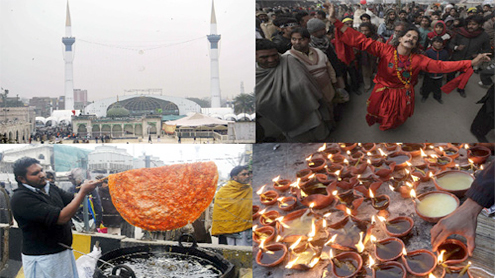 Prayers were offered on the occasion for the solidarity, progress and prosperity of the country. Later, the CM also inaugurated a sabeel of milk, which would continue for three days.Authorities have adopted tight security measures in and around the shrine of Data Ganj Bakhsh.According to the Auqaf Department, more than 80 CCTV cameras and nine walkthrough gates have been installed at the shrine as part of a security plan.

At least 65 security guards are on duty to check each of the visitors with the help of metal detectors. As many as 315 police officials along with 60 officers from the Auqaf Department and 200 volunteers are performing duties inside the shrine.At least 500 mashaikhs and naat khwans will attend urs in addition to thousands of devotees from across the country and abroad.According to the schedule issued by the Auqaf Department, a session to recite the holy Quran and a mehfil-e-naat were arranged on the first day of urs.

The urs celebrations will last for three days and devotees had already begun to pour from across the country before the urs started. The shrine and all adjacent bazaars have been decorated with lights. Devotees wearing anklets, which produce sound and are used during dance, could be seen everywhere at the shrine performing dhamaal. People distribute niaz (charity food), recite the holy Quran, lay chaddars and bouquets at the shrine on this occasion.

The stalls of traditional food, which is mostly seen during urs celebrations, such as andrassay, gulgulay, jalebi and kutlama have also been set up in the adjacent bazaars.Hazrat Data Gunj Buksh (RA) was born in Hujwair, the area falls in what is now Afghanistan, in 373 AH. He was a disciple of Muhammad bin al Hassan al Khuttali (RA) and followed the Sufi tradition of Junayd Baghdadi (RA). He came to Lahore to preach and wrote several books on Sufism, including Kashfal Mahjoob. His writings and simple message brought a large number of the people in the fold of Islam. – DailyTimes