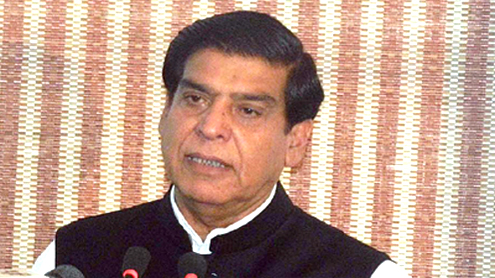 ISLAMABAD: Prime Minister Raja Pervez Ashraf Tuesday directed the Ministry of Commerce to put up a proposal for establishing Trade Dispute Resolution Councils for resolving complaints lodged by importers of Pakistani goods so that international trade can be encouraged.

He said that despite challenges, the country is moving forward, media is free, judiciary is independent and a democratic government is completing its tenure.The economic indicators show rise in foreign exchange reserves and government has been successful in restricting the inflation to a single digit, he added. He said these are not mean achievements.”We should be grateful to Allah Almighty for having enabled Pakistan to become a wheat exporting country now whereas it was importing wheat in 2008,” he said.

The Prime Minister said that Pakistan has business friendly policies and it would be upto the investors to make investment in any sector of their choice.During the meeting, the Prime Minister informed the delegation that the government had made all necessary preparations to qualify for GSP Plus which will give boost to trade with EU countries.The Prime Minister also welcomed a proposal for utilizing the services of successful businessmen abroad who are of Pakistani origin for promoting exports of Pakistan.The meeting was attended by Minister of State for Commerce Abbas Khan Afridi and senior officials. – Brecorder