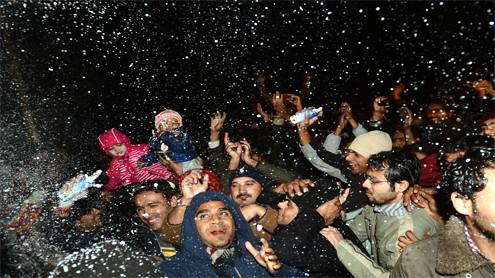 PESHAWAR: Youngsters in the provincial capital were depressed on the New Year’s Eve on Monday as they felt terrorism and cultural curbs had deprived them of even enjoying simple pleasures of life like having a get-together to celebrate the start of 2013.

“I may go to Islamabad with friends to celebrate the New Year as there is no fun here,” Abid Ali, a teenager, told Dawn.He said students associated with religio-political parties often disrupted the New Year functions.“They are so strict that they would not let you even talk of the New Year celebrations,” he said.

While some youths go to other cities to celebrate the arrival of the New Year eating out with friends, doing barbeque and holding music programmes, others looked concerned about the security situation in their own towns.Syed Bilal, a student of University of Peshawar, said he belonged to Peshawar, which had been hit hard by terrorism.“The recent killing of senior politician Bashir Bilour has left us sad. For enjoyment, peace of heart and mind is needed and we have none,” he said.

The student said only those, who had peace in their lives, could celebrate the New Year night.“First, we want peace, then, we can enjoy such occasions,” he said, adding that his New Year wish was peace for the entire country.Many youths feel depressed on the New Year’s Eve, saying there is dearth of fun and activities in the provincial capital, which is often either under attack from terrorists or in mourning for victims of such attacks.

The activists of religio-political groups have long been another hurdle to the New Year celebrations inside educational institutions, according to students.However, there are many, who don’t celebrate the arrival of the New Year.Hina Sikandar said she came from a conservative family, so there was no partying on the eve of the New Year.She said for her, the New Year night went like any other night.

“I simply send messages to friends as the new year greetings,” she said.Some female students of University of Peshawar said they were aware of security problems and cultural curbs but would celebrate the occasion in their own ways.“We are going to decorate our classroom, take food and have fun,” said Haseena, a student of the UoP political science department.She said in a situation when girls could not go out and party, her friends had decided to celebrate the New Year in the classroom.

Haseena’s class fellow, Muneeba, said like other parts of the world, Pakistani youths wanted to enjoy the new year night but local customs and security situation did not allow them, especially girls, to do so.“The situation was much better a few years ago, but now, due to security threats, parents don’t allow us to go to a restaurant,” said Muneeba.Some strict parents don’t let youths enjoy such occasions, according to Haseena. – Dawn