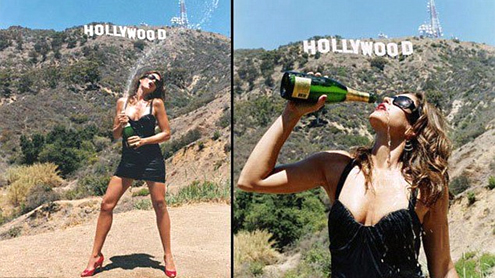 At first it looks like Cindy Crawford has thrown all caution to the wind and is having the wildest time of her life, alone, by the iconic Hollywood sign.

The supermodel is pictured spraying champagne with complete abandon all over her body before taking a hearty swig and letting the dregs dribble down her face.And in her little black dress and scarlet-coloured heels it looks like the 46-year-old is about to go to, or has just left, a raucous NYE  party. Sadly though the ever professional Crawford was just larking about on Monday during a photo shoot with famed photographer Terry Richardson.

Though she did admit she would be popping open a few bottles later on that day the mother-of-two was quick to reassure fans the debauched behaviour was just for show.She wrote on her Facebook page: ‘Happy New Year!! We’re popping champagne tonight to ring in the new year… although it probably won’t be as fun as doing this shoot with Terry Richardson.’Have fun & be safe tonight!’Meanwhile there could be another Crawford in town.

The supermodel’s 11-year-old daughter Kaia recently shot her first fashion campaign for Young Versace, the designer’s line for children aged 0-12.But if she was hoping to launch a career as a model she is out of luck, for her mother has strictly forbidden – at least for now.Talking about the Versace campaign Crawford said: ‘I knew she’d be taken care of because it was Donatella.’But the star has put the brakes on Kaia’s still fledgling career until she gets a bit older.In an interview earlier this year, she said: ‘At this point, she’s too young to pursue a career. There aren’t even a handful of jobs for a 10-year-old girl.’But if she’s 17 and wants to try it… of course, what can I say?’ – DailyMail