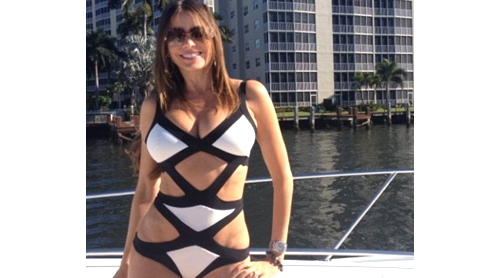 Sofia Vergara obviously didn’t overindulge this Christmas.The Modern Family actress took to social networking to show off her enviable body on Thursday and treated her legions of fans to quite an eyeful.

The playful Colombian sported a daring black and white Agent Provocateur cutaway one piece while holidaying in Miami, Florida, and it’s clear, unlike most, she didn’t hit the turkey and Christmas chocolates too hard. The racy bathing suit showed off her toned tummy and voluptuous cleavage to perfection and Vergara, 40, couldn’t have looked more pleased with herself.

She posted the picture on her Whosay.com account with the message ‘Holyday!’Mother-of-one Vergara is spending the holiday in Miami with her fiance Nick Loeb and her mother and other family members.Possibly the reason Vergara is in such great shape at the moment is due to the hot and heavy scenes she recently filmed with Sharon Stone.

She spent days in a bedroom last month filming an intimate scene with the Basic Instinct star for new film Fading Gigalo.She stripped down to raunchy black lingerie to shoot the sequence, in which she appeared to be playing the seductress.But according to the saucy actress and model, it is all just a big tease.She told Extra: ‘No lesbian loving… somebody I don’t know thought it was more interesting to write, “Oh, Sharon Stone and Sofia Vergara, they have to have like a lesbian scene.”‘ – DailyTimes