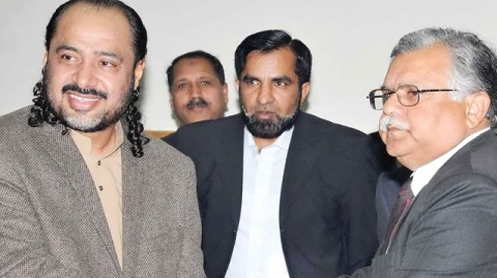 LAHORE: Pakistan Railways (PR) on Wednesday signed a Memorandum of Understanding with a private firm Shalimar Group to run a new fast train ‘Night Coach Express’ under the public-private partnership.

Rana Rafaqat of Shalimar Group presented a cheque of Rs 100 million to General Manager PR Junaid Qureshi for the rehabilitation of locomotives. Under the agreement the Night Coach will be launched in the first week of January between Lahore and Karachi. Additional General Manager Traffic PR Abdr Razzaq Shah and Managing Director Shalimar Group Rana Rafaqat signed the agreement.

According to the agreement the train operation rights are being granted to Shalimar Group for five years and this duration is extendable to another five years. PR will manage the train operations while commercial management will be done by the private sector. Shalimar Group will pay Rs 632 million annually. However the operator of the train will be bound to pay PR Rs 1.73 million on daily basis before the departure of the train in addition to Rs 100 million for engines repair and 10 percent of the total (annual) payment and Rs 63 million as security.

It has also been revealed thzough the study of the agreement the private train operator will also be bound to spend Rs 81 million on different services for the passengers. The fast train covering the distance between Lahore and Karachi within 18 hours will leave from Lahore and Karachi simultaneously at 6:00pm in the evening and would arrive at its destination next day at 12pm in the afternoon. The train will have one AC sleeper, two lower AC and 7 economy class passenger coaches in addition to a dinning car and luggage van. The train will have stops at Faisalabad, Multan, Bahawalpur, Rohri, Nawab Shah, Hyderabad and Karachi Cantt stations.  – DailyTimes