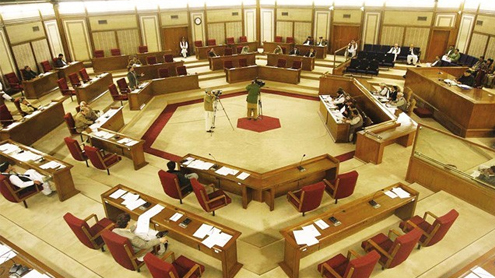 QUETTA: The Balochistan Assembly passed a no-confidence motion against Speaker Aslam Bhootani on Wednesday, ousting him from the office in a bid to end constitutional deadlock in the province.

The session was chaired by deputy speaker Syed Mati-ullah Agha.49 MPAs including Chief Minister Aslam Raisani attended the session.The motion was tabled by JUI-F’s provincial minister Ainullah Shams.The resolution was passed with simple majority. Forty seven members favoured the resolution while a single vote was casted against the motion.

A rift between Chief Minister Aslam Raisani and the speaker widened after the latter’s refusal to chair sessions of the assembly in wake of the Supreme Court’s verdict in the Balochistan law and order case.During the session, MPAs Sadiq Imrani, Jan Ali Changazi and Tariq Magsi staged a walkout.Aslam Bhootani said he would challenge the no-trust motion and the procedure adopted by the provincial government in court.

The motion was moved on December 19 against the speaker after he had refused to chair any session of the house as the status of the provincial government was not clear following a Supreme Court ruling.Bhootani said that according to Supreme Court orders, the government was unconstitutional and he could not preside over the session of the assembly.Aslam Bhootani served as the Balochistan Assembly Speaker for 4 years and 8 months.The session was prorogued sine dine. – Onlinenews