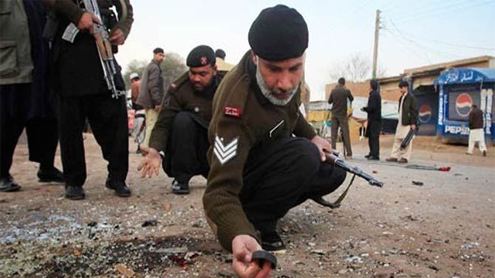 PESHAWAR: The number of Frontier Constabulary personnel, manning checkposts in the suburban areas of Peshawar, has been increased to counter terrorists’ attacks, according to sources.

Fasih Khan, an official at Sarband police station, said that security was further beefed up and policemen on leave were called back on emergency basis after attacks on the airbase and senior minister Bashir Ahmed Bilour.“We have all kinds of light and heavy weapons to counter the attacks. Movement of suspected elements is thoroughly checked on the link roads and pathways,” he claimed.

The official said that militants used to fire rockets at nighttime but they could not come close to the checkposts, manned by police and FC.A police source said that two militants were killed in an attack on Zakhail police post located close to Frontier Region of Peshawar. The body of a terrorist was in the custody of police, he added.However, another official of rural circle, narrating the ordeal of FC and policemen deployed in the sensitive area, said that most of the personnel had been given old model rifles that could fire only 10 rounds. He said that out of 26 FC personnel only 11 were armed with Kalashnikovs.

The number of police deployed at Zakhail police post, he said, was also low. He said that they had a single heavy gun while militants possessed all kinds of heavy arms and ammunitions that always caused losses of lives and damage to the police posts in the past.Appreciating the role of local anti-Taliban volunteers, he said that following information about the attack on the post on Friday night, members of Adezai Qaumi Lashkar reached the spot and extended full support to the law enforcers.

The official said that it was result of their joint efforts that militants suffered casualties. The body of a militant was found after the clash.He said that the killed militant was identified as Feroz Khan, a resident of Adezai village. The body was shifted to Matani police station but his relatives avoided receiving it for burial, the official said and added that it was later taken to the local mortuary.

SP Mohammad Javaed Khan, when contacted, claimed that police were well armed and fully alert to encounter the attacks. He said the number of FC personnel was doubled and their movement was increased to keep an eye on suspected elements in the border area.

The SP said that police had to fight on several fronts but even then they managed to control movement of militants on the roads. “We also have to move in the night despite threats as enforcement was necessary,” he added. Mr Khan said that Sheikhan area had also become sensitive as militants from the nearby Khyber Agency used to attack it frequently. “We also repulsed an attack on Sunday night,” he said.

PROBE: The investigators are yet to get any clue about the facilitators of the suicide bomber, who attacked Bashir Bilour at Dhaki Naalbandi in Qissa Khwani Bazaar.“We have started recording statements of people in the area but none of them are ready to give any concrete information,” Fazl Rehman Khan, the investigation officer, told Media.He said that the investigators were also thoroughly monitoring the press statements of the eyewitness but it seemed that there was no accuracy in the statements.

Another member of the team, pleading anonymity, said that Taliban claimed responsibility for the suicide attack but police could only probe that how the bomber reached the target despite security.Meanwhile, a spokesman for Lady Reading Hospital said that most of the injured of the suicide blast were discharged from the hospital. Six of them were still under treatment, he said. – Dawn