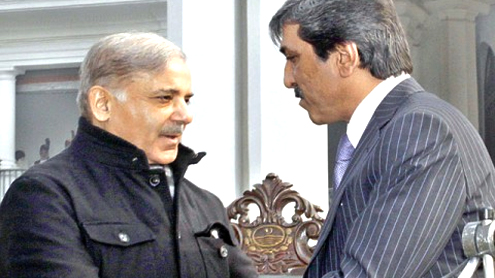 LAHORE: A seasoned politician from Rahim Yar Khan, Makhdoom Ahmad Mehmood, was sworn in as Punjab’s 28th governor on Tuesday at an impressive ceremony on the spacious lawns of the Governor’s House.

Lahore High Court Chief Justice Umer Ata Bandiyal administered the oath. Punjab Chief Secretary Nasir Mehmood Khosa read out the commission of appointment of the new governor on behalf of President Asif Ali Zardari. Makhdoom is 8th governor from south Punjab as seven politicians from the region, including his predecessor Sardar Latif Khan Khosa, have already served as constitutional head of the province. They are Mushtaq Gurmani, Mustafa Khar, Nawab Muhammad Abbas Khan Abbasi, Sadiq Hussain Qureshi, Sajjad Hussain Qureshi and Sardar Zulfiqar Khosa. He is 58the governor of Punjab if counted from the pre-partition period.

As expected, no member of the Chaudhry family of Gujrat turned up on the occasion, perhaps, due to the anticipated presence of their political rival, Shahbaz Sharif, at the ceremony.  Federal ministers, Manzoor Wattoo and Samina Ghurki, a good number of PPP leaders, including Jehangir Badr, Raja Riaz, Abdul Qadir Gilani, Mujtaba Gilani, Aslam Gill, Haji Chan, Aurangzeb Burki, Faiza Malik and Sajida Mir were also present. PPP activists raised the slogan of “Jiay Bhutto’ when Mehmood was sworn in as the governor. Jamaat-e-Islami Punjab President Dr Wasim Akhtar and central JUP leader Pir Ejaz Hashmi represented their parties.

A considerable number of Makhdoom’s followers from his hometown also attended the ceremony. They were seen having tea and biscuits in different compartments of the Governor House after the ceremony. Later, the new governor went to Data Darbar to pay homage to Hazrat Ali Hajveri. He also visited the mausoleum of Allama Iqbal, the Poet of the East. Then he went straight to the grave of his mother in Gulberg and remained there for some time.  Talking to the media after taking oath, Ahmad Mehmood said he would try his level best to promote democracy and reconciliation in the province.

He said he enjoyed cordial relations with the Punjab rulers and would have no problem in developing a good working relationship with the provincial government. He hoped the Punjab government would pay maximum attention towards the provision of education, healthcare and other facilities to the people.He said he was aware of the financial constraints of the province, and would not receive his pay as a governor. Makhdoom said he would keep giving advice to the provincial government on how to facilitate the masses in a better way.

To a question about Dr Tahir-ul-Qadri, he said he had great respect for him, but he should not put his well wishers to test. On south Punjab province, he said the Punjab assembly and the National Assembly had unanimously demanded the restoration of Bahawalpur province and he would try to get these resolutions implemented. He added it was the time that leaders from of all the political parties should pay attention towards forming caretaker governments. Ahmad stressed the need for developing understanding between the government and the opposition in the larger interest of the country.

The governor thanked President Asif Ali Zardari and PPP Chairman Bilawal Bhutto Zardari for reposing confidence in him for this slot.  He said that after his meeting with the president, the prime minister, PPP Chairman Bilawal Bhutto Zardari and Faryal Talpur, he would also meet PML-N chief Mian Nawaz Shairf. The governor clarified that his appointment was not the result of any backdoor diplomacy or understanding. He also paid tribute to the political vision of Shaheed Benazir Bhutto and greeted the Christian community on the happy occasion of Christmas.