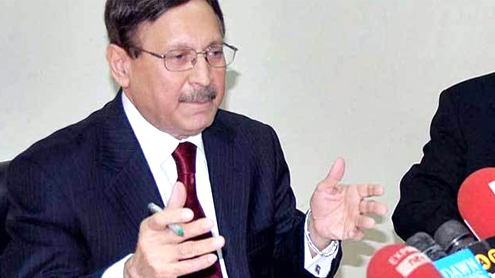 ISLAMABAD: In the PPP darbar, the legal eagles keep coming and going. Such is the pace of their comings and goings that it is difficult to keep track of who is in favour and who is not.

A year ago, it was Aitzaz Ahsan who was the blessed one, with hopes running high that he would be able to save then prime minister Yousuf Raza Gilani from the SC’s contempt case. Mr Ahsan followed President Asif Ali Zardari at Garhi Khuda Bakhsh in addressing the gathering for Benazir Bhutto’s death anniversary.A year on, he may not be as out of favour as Babar Awan, but he is no longer the party’s man for legal issues.

That role now belongs to Farooq H. Naek who is handling a lot more than the files that pass through his law ministry.With the ever expanding role of Mr Naek in the PPP, party sources believe he will be playing a key role in backdoor negotiations with the opposition PML-N over a caretaker set-up.After having resolved the Swiss letter issue and the recent passage of the controversial fair trial bill through unanimous vote in the National Assembly, the PPP leadership has decided to use Mr Naek’s negotiating skills with the PML-N for the selection of the caretaker prime minister, an insider said.

Mr Naek is a relative of Khawaja Asif, a PML-N stalwart, and the two are often seen exchanging notes during National Assembly sessions.Talking to Dawn, Mr Naek reiterated his party’s stance that under the Constitution, a caretaker set-up should be in place after March 16. “The PPP and PML-N will resolve the issue amicably before then.”When pressed, the law minister said the Constitution, after the 20th Amendment, was categorical that both the leader of the house and the opposition had the mandate to hold discussion over a caretaker set-up.

However, the PPP sources said Mr Naek, who had played a key role first in persuading President Asif Ali Zardari to write a letter to the Swiss government and then convincing Supreme Court judges in closed door meetings to work for an amicable resolution of the contempt issue, was the man in charge in the ruling party.Last week it was Mr Naek who single-handedly managed the passage of the controversial fair trial bill with support of the PML-N.

“One can imagine the level of confidence which the law minister is enjoying at the moment with the party’s high-ups from Mr Naek having allowed on his own, on the insistence of the opposition party, over 30 amendments to the bill after it had been presented before the National Assembly,” the PPP sources said.A PML-N office-bearer close to its leadership also confirmed back-channel contacts between the two parties regarding selection of a caretaker set-up and said the Naek-Asif duo would be playing a key role. If Mr Naek was enjoying his new found love with the PPP leadership, Khawaja Asif had always been taken seriously within the PML-N, he said.

Therefore, it wouldn’t be a surprise if the two lawmakers played a key role in reaching a consensus on a candidate for caretaker prime minister, he said. He said it was good for the two parties that their key-lawmakers were not only relatives but also on good terms with each other.A PML-N spokesman, Senator Mushahidullah Khan, said leaders from the two sides had been meeting every now and then. “But so far there hasn’t been any formal consultation between the prime minister and leader of the opposition over names for the caretaker set-up.”

In reply to a question, the senator said he believed the prime minister should by now have contacted the leader of opposition to initiate the process.About the choice of a candidate, sources from the two parties said instead of picking some retired judge, bureaucrat or a distinguished lawyer, as reported earlier, now the focus was on somebody with a strong political background.“We don’t want to put in place somebody who tomorrow might agree to the much talked about idea of a prolonged caretaker set-up. A consensus care-taker prime minister, from the PPP, PMLN or any other political party, at least would stick to his basic job of conducting general elections,” a PML-N lawmaker said.

The appointment of the new governor in Punjab, Makhdoom Ahmed Mehmood of the PML-F, was a case in point, he added.In the second week of November, Leader of Opposition in National Assembly Chaudhry Nisar Ali Khan had said that he had short-listed names of a couple of judges for caretaker prime minister. His reference appeared to be to Justice (retd) Nasir Aslam Zahid and Justice (retd) Shakirullah Jan.Earlier, Chaudhry Nisar had said that the PML-N had short-listed nine names to head the caretaker government and the list would be released after consulting other opposition parties, including the Jamaat-i-Islami, Pakistan Tehrik-i-Insaaf and nationalist parties.

The 20th Amendment provides for the appointment of a caretaker prime minister by the president in consultation with the prime minister and the leader of opposition in the outgoing National Assembly. In case the outgoing prime minister and leader of opposition do not agree on any name within three days after dissolution of the National Assembly, each of them will forward two names to a parliamentary committee to be immediately constituted by the National Assembly speaker to decide on a name within three days. Otherwise, the names will be referred to the Election Commission which will take the final decision within two days. A similar procedure is to be followed in the provinces. – Dawn