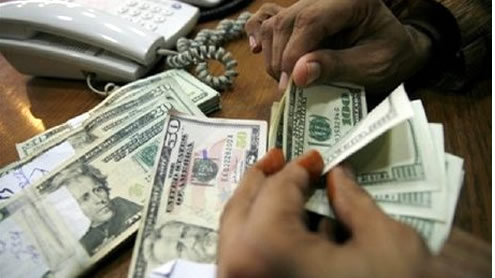 Pakistan’s local currency continues to face headwinds as external account pressures persist. Depleting foreign currency reserves on account of principal repayments to IMF, falling interest rate and little or no inflows in financial and capital account have all contributed towards PKR/USD depreciation of 8.5% YTD in Cy12 to 97.53. 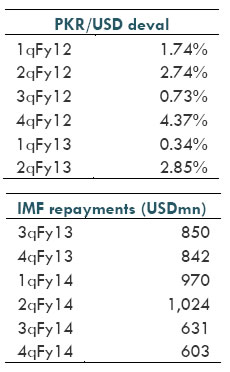 Pakistan has repaid IMF USD 2.4bn since Feb-12, while, it has to repay another USD 1.7bn in current fiscal year. SBP Fx reserves have depleted to USD 8.6bn (14th Dec-12), as against USD 12.8bn in Dec-11. It is imperative to note that the leakages in Fx reserves have continued to take place despite CSF inflows of USD 1.12bn in Aug-12. We believe, local currency is likely to remain under pressure as further repayments to IMF take place along with the need to finance current account deficit in the absence of inflows from financial and capital account. Meanwhile, likely inflows of USD 600mn in CSF will provide some breathing space to reserves. Although unlikely but realization of inflows from 3G auction and easing of oil prices in international market can bode well for external account position.

Banks; neutral to positive: Banks with long side position in derivate instruments should benefit. Furthermore, banks like HBL and UBL with decent exposure in overseas market will benefit from re-pricing of their assets. However, the impact remains neutral for overall banking sector.

E&Ps; positive: As oil & gas pricing is in USD, PKR based revenues of the sector escalate thereby translating into higher profitability. Oil refining &

distribution; neutral to negative: Refining margins are positively impacted as they are USD based while deregulated products for OMCs also benefit as their margins are not fixed in PKR terms. However, companies relying on imported fuel such as PSO and NRL bear exchange losses on foreign payments. Whereas companies procuring fuel locally (APL) are largely immune.

Cement; neutral: Manufacturing costs of cement companies increase on account of rising cost of imported coal. However, cement players with greater exposure to export markets are able to mitigate its impact.

Telecom; neutral to positive: With settlement rates on international incoming calls persisting on the higher side, LDI operators stand as the major beneficiary. However, cost of capital expenditure increases owing to dependence on expensive imported equipment.

Chemicals; positive: In fertilizer sector, the primary beneficiary is FFBL as it prices DAP on import parity. Moreover, imported urea becomes expensive for GoP which bodes well for domestic urea manufacturers. With USD denominated primary margins for most of the chemicals like PTA, PSF and PVC, impact on bottom-line is positive. However, for chemical companies with USD denominated loans like EPCL, it is a mixed blessing.

Textile; positive: Being a leading exporter, textile sector is the major beneficiary. Not only PKR based realized revenues increase, sector’s overall competitiveness as compared to other regional players like, India, China, and Bangladesh etc also improves.

Autos; negative: As raw materials & parts are imported, input costs increases for assemblers, causing a major dent to their margins.

Murder Weapon of the Future: The Smartphone

Murder Weapon of the Future: The Smartphone