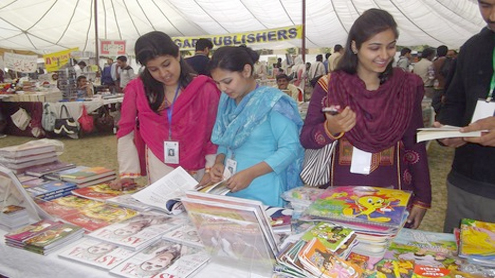 The book fair is being held on the eve of 21st Anniversary Celebrations of DCL. The event marks the beginning of different literary, educational and cultural functions organised on the occasion. Twenty leading publishers/ booksellers of the metropolis are participating in the event and giving 20 to 50% concession on sale of books. Latest books on subjects of varied interest, including literature, social sciences, philosophy, psychology, religion etc are available at the exhibition.

Speaking after inaugurating the ceremony, Brig Abdullah said that the aim of organising anniversary functions was promotion of knowledge and reading habits in society. He reiterated that DHA was determined to provide best possible facilities to its residents including promotion of education and literary culture in the society. Later an educational seminar on the topic of ‘Role of Libraries in Promotion of Reading Habits in Society’ was held at DCL Auditorium.

Lt Gen (retd) Syed Tanwir Husain Naqvi addressing the seminar said that libraries are repository of knowledge and wisdom. He said reading helps boost intellectual development of analytical mind and personality of people. He stressed the need of establishing a network of libraries in the country.Renowned scholar Ghazi Salahuddin said that libraries are the hub of intellectual development and self-education, which is essential for advancement in life. He stressed the need of having a large number of libraries in all localities for development of positive trends in society.

Ms Ameena Saiyid, MD Oxford University Press, said that libraries play a pivotal role in facilitating reading of books. She described Defence Central Library as a model library of the metropolis. Sardar Muhammad Ashraf said that the books are best friend and bring reformation in life.Earlier Secretary DCL Lt Col (Retd) Rafat Naqvi in his opening address highlighted the importance of role of libraries in resurgence and reformation of society. On Friday, 21st Dec 2012 a literary-cum-cultural programme ‘Aik Shaam Himayat Ali Shair Kay Naam’ is being held at DCL Auditorium at 8.P.M. which is open for public. – Dailytimes