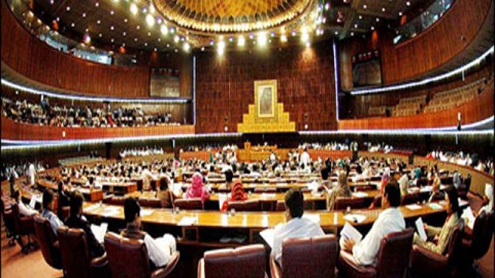 ISLAMABAD: The National Assembly on Thursday unanimously passed a bill that will give intelligence and security agencies sweeping powers to conduct surveillance and collect data from SMSs and emails, with the prime minister saying the law is aimed against the ‘enemies of humanity and terrorists’ and not the ordinary citizens.

The lawmakers put their stamp on the Fair Trial Bill 2012, which was presented by Law Minister Farooq Naek, after incorporating amendments proposed by main opposition party PML-N and ruling government partner MQM. The house approved 31 proposed amendments, while two important clauses were rejected by treasury benches on the back of its numerical strength.

The bill provides for investigation and collection of evidence by means of modern techniques and devices to prevent and effectively deal with scheduled offences. The evidence can be collected by the intelligence and law enforcing agencies even before registration of FIR through intercepting emails, SMS, IDPR (internet protocol detail record), CDR (Call detail record) and any form of computer based or cell based communication.

The treasury benches recommended withdrawing FIA from the list of empowered agencies however names of three armed services Intelligence agencies along with ISI, IB and Police were included. The house also rejected with a majority vote PML-N amendment in schedule-1 of the bill witch deals with offences to be dealt through this bill, as the PML-N legislators wanted that only offences under Anti-Terrorism Act 1997 should fall in it. Another important amendment seeking the one-year term for this bill to be reviewed to check its effectiveness in dealing with the terrorism menace was also rejected.

Prime Minister Raja Pervaiz Ashraf, who spent most of the time gossiping and apparently signing applications of MNAs from treasury and opposition benches, congratulated the house on passage of this bill. The main purpose of the bill is to eliminate terrorism, he said. This bill will send a “message to terrorists that the whole country is united against them and accepts their challenge”, he added.

Against the backdrop of concerns expressed by some political parties and civil society groups, he said the bill was aimed at “enemies of humanity and terrorists, and not against ordinary citizens”. “It will protect the lives of ordinary citizens,” he said. This is not an issue of one political party but that of the entire nation, he added.He said the entire country is in the grip of terrorism which has not only destroyed the fabric of our society but also maligned them in the international community. “We have given a message to the whole world by passing this bill that we want to strengthen our law enforcement agencies and security agencies in every way so that they are successful in the war against terrorism.”

Appreciating the sacrifices of security forces in the war against terrorism, the PM said that they have always confronted the challenges with courage and resilience. Condemning the attacks on polio workers he said these dark forces did not even spare the polio vaccination teams. Agreeing to the concerns expressed by Opposition Leader Ch Nisar Ali Khan, he said there is always room for improvement and the parliament will use its wisdom in future also to improve this bill.

In response, Ch Nisar Ali Khan said keeping in view the current security situation they had supported the very objectives of the bill. He, however, regretted that the standing committee concerned did not hold threadbare discussions on the bill. Thanking the government for incorporating most of their amendments, he suggested establishing a monitoring mechanism to oversee the implementation and review the legislation after a year.

Nisar said that in the past even sitting prime minister’s telephones were tapped and now at least it would not happen in such a way. “Though it is not an idea bill but the way amendments were discussed is the beauty of parliamentary democracy… PML-N would continue stressing to review it.This bill will not be beneficial if misused.”Earlier, lawmakers of PML-N, MQM, ANP and PML-Likeminded were also seen staging walkouts due to not presenting of answers of most of the questions made during the Question Hour. It was noted that 25 questions were unanswered out of total 39 questions.

The lawmakers which actively engaged in deliberating on the Fair Trial Bill were PPP’s Law Minister Farooq Naek and Shazia Marri, PML-N’s Ch Nisar, Zahid Hamid and Anusha Rehman, and MQM’s S Iqbal Qadri and some others. The opposition legislators time and again pointed out the gathering of MNAs around the PM who carried on his meeting-cum applications signature engagement for over an hour.

This bill, which will have to be passed by the Senate and approved by the President before it can become law, will also regulate the powers of the law enforcement and intelligence agencies. Under this bill, all the law enforcement and intelligence agencies will be governed by a uniform legal system for collection of evidence, which will be admissible even if collected prior to the registration of an FIR. This would provide a legal framework to the agencies to lawfully conduct the surveillance of individuals suspected of engaging in preparations to conduct an act of crime or terror.

This bill will render necessary assistance in successful prosecution of perpetrators of such crimes. When came into effect, the law will prevent the arbitrary use and abuse of interception powers particularly by the intelligence agencies and force them to abide by the law. It will encourage investigation to only collect genuine evidence in accordance with law and curb the temptation of planting false and fabricated evidence against individuals in violation of their human rights and civil liberties. – Nation