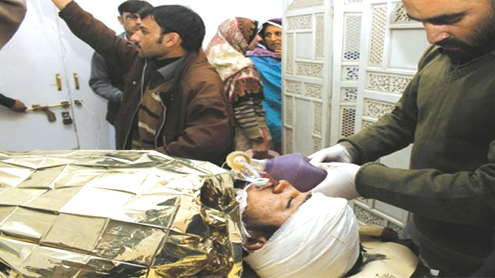 Eight people working to immunise children against the highly infectious disease have been shot dead in the country since Monday, the day a three-day UN-backed nationwide vaccination drive started.The Wednesday’s strikes in Peshawar, Charsadda and Nowshera prompted Unicef and WHO to suspend work, though they vowed to keep supporting Pakistan in its bid to eradicate the crippling disease. Police said that a woman Polio Supervisor was on way to duty along with her driver in Mazaray area of Shabqadar on Wednesday, when unidentified miscreants triggered firing on their vehicle.

Both the injured were rushed to District Headquarters Hospital Charsadda where they succumbed to their injuries.Earlier the same day, another worker was shot and critically wounded while giving out polio drops on the outskirts of Peshawar. Khazana Police told The Nation that Muhammad Wesal Khan, father of victim Hilal, told them that his son was targeted in Sherojangi area while he was accompanying another female polio worker who luckily remained safe in the incident.

Police said Hilal sustained one bullet in his head and he was shifted to trauma unit of Lady Reading Hospital in Peshawar. After initially reporting the man’s death, doctors at the hospital later said he was being kept alive on life support equipment. “Medically he is dead but we have put him on a mechanical ventilator. This is our last try for his life but he is not responding,” a neurosurgeon was reported as saying. Three other polio teams were targeted in similar attacks in Nowshera and Charsadda, police and health officials said, but the workers escaped unharmed.

The first attack came in Deri Zardad area of Charsadda while the second attempt was made in Paro area of the same district. In the third attack in Qilla Behram area of Nowshera, one passer-by suffered minor injuries. Violence has blighted every day of the polio campaign so far: one health worker was shot dead in Karachi on Monday and four more were killed in the city on Tuesday, while another was gunned down in Peshawar the same day. The repeated attacks on polio campaigners across the country have caused a wave of fear among them and many of them have refused to work without proper security.

The bloodshed prompted the UN children’s agency Unicef and the World Health Organisation to suspend work on polio campaigns across the country. Unicef spokesman Michael Coleman told a foreign news agency that the two organisations halted work in Sindh and Khyber Pakhtunkhwa after Tuesday’s attacks but had now extended the suspension nationwide. In a joint statement, the two UN agencies condemned the attacks and expressed sympathies to the victims and their families.

They said “those killed or injured, many of whom are women, are among hundreds of thousands of heroes who work selflessly to eradicate polio and provide other health services to children in Pakistan”.“Such attacks deprive children in Pakistan of their right to basic life-saving health interventions and place them at risk for a disease that causes lifelong disability. In light of the prevailing security situation, WHO and Unicef Pakistan are implementing additional security protocols to ensure safety of their polio workers… We remain committed to supporting the government and the people of Pakistan in their efforts to rid the country of polio.”

Polio cases in Pakistan fell to 28 in 2005 but have risen sharply in recent years, hitting 198 in 2011 – the highest figure for more than a decade and the most of any country in the world last year. There have been 56 infections so far in 2012. Rumours about polio drops being a plot to sterilise Muslims have long dogged efforts to tackle the disease in Pakistan. Suspicion of vaccination programmes intensified after the jailing of a doctor who helped the CIA find Osama bin Laden in 2011. There has been no claim of responsibility for this week’s attacks. – Nation