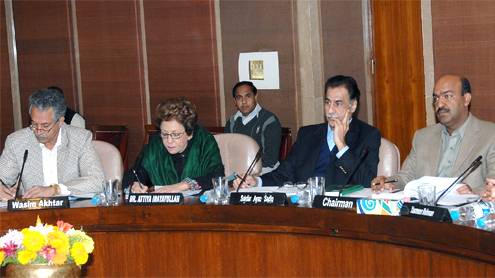 ISLAMABAD: The Chairman of Public Accounts Committee, Nadeem Afzal Chan has said that audit of those dabbling in millions was as important as that of the lowest menial employee.

Speaking to a private TV channel on Tuesday, he said that even the Supreme Court’s audit would also be carried out, while (one such example) Fakir Hussain (Registrar Supreme Court) was equally subject to audit, as he was not absolved by any means.“This would set a new precedence, the Army Chief, President and Parliament (also equally subject to audits) could also refuse their audits”, he maintained.

“Judiciary is independent nowadays and while Registrars do appear before PAC when summoned, the (then CJ), Lahore High Court, Iftikhar Muhammad Chaudhry refused to appear before PAC”, he opined, adding that the Registrar‘s position was a wrong one, while he sought, was enjoying the support of full court.“As such the Registrar (Fakir Hussain) was misguiding the court”, he maintained, expressing his high hopes that this case would definitely be reviewed by judges, and was confident that the case would be decided on merit.

Chan scoffed at persons, who never tired of quoting Caliph Omar’s resolve to account for every (official) single coin spent, yet “it seemed that Registrar Fakir Hussain stood absolved of any resolve expressed by Holy Caliph Omar”.Referring to the issue of audit of consolidation fund, he said that the Presidency, Senate, National Assembly and Election Commission all stood involved ion the issue; otherwise they all would all have to resign.

He also discounted any link between judges’ conduct and appearance of Registrar in front of PAC, as Registrar’s appearance in front of PAC would only be required for audit paras, and cautioned that conceding immunity to any one institution would mean destruction of entire system.Conceding that government had a number of issues running in Supreme Court, he said that PAC could have sent its reference a year earlier, but had to refrain since the case against Yousaf Raza Gilani was in progress, which could have compromised the essence of impartiality. – Onlinenews