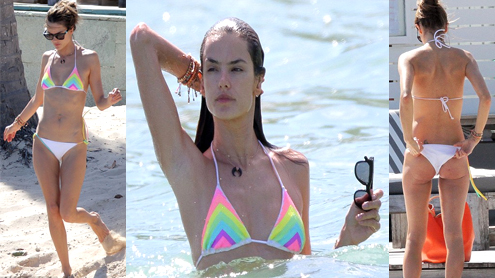 For many of us, our lunch break consists of popping to the nearest Pret A Manger or greasy spoon for quick bite before returning to our desks.

But for Brazilian supermodel Alessandra Ambrosio, she gets to cool off in the Caribbean during her down time on the latest Victoria’s Secret shoot.Already dressed in one of the American chain’s newest bikinis, the mother-of-two worked on her tan and enjoyed a dip in the sea when it got too hot.Despite posing in the surf and on the sands throughout the day, the sun-loving model was happy to stay outside and continue to soak up the rays during her break.

After a dip in the sea, Alessandra worked on her year-round tan as she lay on a sun lounger.She also treated herself to a cocktail as she read the latest copy of People magazine.The brunette beauty is one of several Victoria’s Secret Angels in St Barts to shoot the new Spring/Summer 2013 campaign.Her photoshoot comes just seven months after the birth to her second child, son Noah.The 31-year-old reforged her post baby body with a punishing workout regime, which included cardio and yoga.After the birth of her daughter Anja in 2008, she admitted she had over-indulged herself.

She said: ‘I’d been eating everything I wanted – everything! – and once you get used to that, it’s hard to stop.’Her personal trainer Leandro Carvalho explained how he put her through her paces to get her back to her best.He said: ‘We worked out every day. We didn’t have a day off because time was so short.’She was limited in the beginning, as she could not do crunches, sit-ups, lunges. But Ambrosio did what she could – climbing, walking and using ankle weights in the early stages.’Once her base fitness was back her devised a program that consisted of intense cardio including ballet, capoeira, and pilates, for two hours each day. – Dailymail