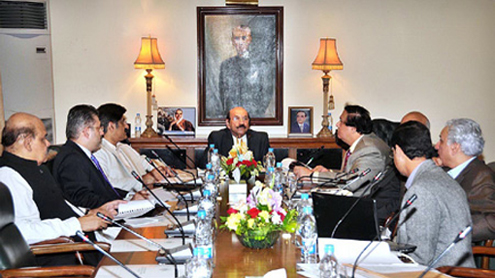 He announced that 10,000 two-room houses would be supplied/allotted to poor and needy people/families throughout province within three months.Shah said that as per commitment, 50,000 plots were being provided to poor, deserving and needy people, and first 5,000 plots for Karachi would be allotted to the needy and the poorest people on birth anniversary of Shaheed Zulfikar Ali Bhutto on January 5.

He further said that the houses constructed by the Governments of Turkey and Iran would be distributed and allotted to flood/rain affected people of Thatta, Badin, Jacobabad, Shikarpur, Kashmore and Khairpur districts.The chief minister directed that the process of construction of low cost houses be completed immediately so as to meet the challenge and houses were distributed within 3-month.

The chief minister said that the government of Pakistan People’s Party (PPP) had always served the people without any distinction and promises made by the leadership for provision of houses had always been fulfilled.He also directed all Advisors to Chief Minister Sindh to visit various districts and coordinate and monitor the work.Earlier, the Chairman of SBBHC in his detailed briefing informed that the Cell was established in 2008 with an allocation of Rs 3 billion and decided to construct low cost houses instead of model villages.

He further informed that SBBHC took over possession of a project of 368 flats built by Pakistan Housing Authority at Landhi, Karachi, and President Asif Ali Zardari gave away allotment letters and keys to 155 heirs of the martyrs of October 18 and December 27.Chairman SBBHC further informed that it was decided that out of remaining 213 flats, BHC should retain 83 flats, while the possession of 130 flats be handed over to SGA&CD.He added that in first phase, 5,611 beneficiary families had been identified/ selected by elected representatives. – Dailytimes