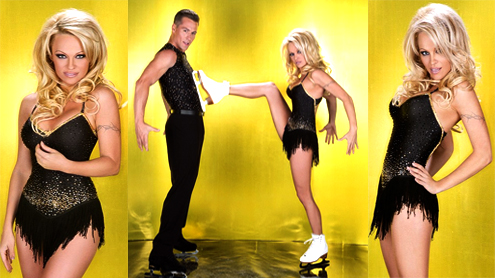 Pamela Anderson, Lauren Goodger and Shayne Ward are among the celebrities set to be competing on next year’s Dancing On Ice.

It had been rumoured that former Baywatch star Pamela would be joining the show when it returned to ITV on Sunday January 6, with the news officially confirmed by the channel on Tuesday morning.And 45-year-old Pamela, who will be skating with partner Matt Evers, has revealed she is itching to get started.She said: ‘I’m so excited to take part!’But Pamela will have strong competition from her fellow contestants, which include ex TOWIE star Lauren Goodger.The 26-year-old reality star, who shows off her figure in a black tasseled outfit in the official portrait shots for the series, admitted that she terrified about having to perform the routines on live television.

All the stars began their training for the show earlier this year in a bid to ensure they are somewhat competent on the rink ahead of the series premiere.Anthea Turner, who has hit headlines in recent months due to claims that her husband Grant Bovey was having an affair, is doing her best to put the scandal behind her and concentrate on furthering her own career.But Anthea admitted she has suffered her fair share of injuries since she began training for the TV talent show.Asked how many bruises she has had since she started practicing, Anthea said: ‘I am not sure but I have got a massive one on my bum and some on my legs from the lifts!’

Former X Factor winner Shayne Ward, who recently starred in hit West End musical Rock Of Ages, will also compete.The 28-year-old left the show to concentrate on recording new material, but seems to have his heart set on this new challenge.Former MP and labour politician Oona King is also gearing up from the show, a very different competition than when she went up against Ken Livingstone for her chance to run for London Mayor.

Following in the footsteps of Louis Smith, who is currently starring on Strictly Come Dancing, fellow Olympic gymnast Beth Tweddle will take to the ice to compete, as will Olympic boxer Like Campbell.Soap stars Samia Ghadie, who plays Maria Connor in Coronation Street, and Matt Lapinskas who played Anthony Moon in EastEnders have also joined the line-up.Funnyman Joe Pasquale will be joined on the ITV show by Welsh rugby player Gareth Thomas, both of whom will be vying for public votes.

The show, presented by Phillip Schofield and Christine Bleakley, also sees the return of sharp-tongued judge Jason Gardiner.Australian Gardiner, who famously described watching swimming champion Sharron Davies dance as looking at ‘faecal matter that won’t flush’, started as a judge when the show launched in 2006.He also caused controversy when he was accused of bullying former judge Karen Barber by telling her: ‘If your opinion still mattered, you’d be on the panel.’Gardiner’s comments have also included telling Chloe Madeley she had a ‘baboon bottom’ and ex-Neighbours star Craig McLachlan that he looked like he was performing with a ‘soiled nappy’.Last year’s show was won by Emmerdale star Matthew Wolfenden. – Dailymail