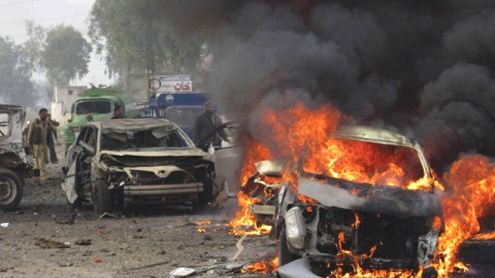 JAMRUD: A car bomb killed 21 people including women and children and wounded around 80 others when it exploded near a bus queue at a market in Jamrud town of Khyber Agency on Monday.

The 30-kg bomb planted in a vehicle parked near the market area went off as people were waiting for buses to take them to other parts of the country, officials said.Pools of blood and charred flesh littered the roadside, along with at least 20 burnt vehicles. Clothes, school books, children’s shoes and burqas lay everywhere. A district administration office was around 100 metres from where the bomb was detonated but was not damaged in the attack.“Seventeen people were killed in the blast. Fourteen bodies were brought to our hospital while three people succumbed to their wounds on their way to Hayatabad Medical Complex in Peshawar,” said Doctor Sameen Jan Shinwari at the Agency headquarters hospital in Jamrud. Later reports said another four injured had succumbed to the injuries, taking the death toll to 21.

Doctor Sameen said, “Four women were among those killed in the blast and they were all Afghans. These women were coming from the border in a hired car, which was completely destroyed. These women’s Afghan passports were found in a bag.” He said a five-year-old Afghan girl accompanying the women and two six-year-old Pakistani boys were also killed.Two intelligence officials said the explosives had been packed into a Suzuki Alto vehicle. Driver Taj Muhammad, 40, said he was entering Jamrud when he heard the explosion and saw a ball of fire.

Pakistan suffers frequent bomb and suicide attacks blamed on Pakistani Taliban and al-Qaeda-linked militant groups, and its troops have for years been fighting them in the semi-autonomous belt on the Afghan border.Saturday night a suicide squad of militants targeted the airport in Peshawar, the main city close to Jamrud, killing five civilians on that day. But on Monday, the civilian death toll rose to nine as another victim succumbed to injuries, while another three of the 42 injured have been shifted to the ICU of Khyber Teaching Hospital.

The assault was the second militant attack in four months on a military air base in Pakistan, and a high level investigation team formed to probe the incident had begun its work on Monday.On Sunday a policeman and five militants were killed following gunbattles between security forces and militants suspected of having been involved in the airport attack. University Town Police said that FIR of the airport attack had been registered but FIR of Sunday’s police encounter was yet to be lodged. They said authorities have decided to conduct DNA test of the killed terrorists and samples had been sent to Lahore.

Also in Peshawar, police on Sunday night thwarted a bid to blow up a cinema near Bacha Khan Chowk. Police were tipped off about suspicious stuff placed near Shama Cinema on Pajaggi Road after which the Bomb Disposal Squad was called which detected and defused a two-kilogram bomb.In Lakki Marwat district of KP province, three soldiers were martyred and three injured in clashes ensuing after dozens of armed insurgents stormed a check post on Monday. The wounded troops included a Major rank officer.In Lower Dir, bordering KP,  army conducted raid in tehsil Maidan on Monday and recovered huge cache of arms and ammunition hidden in the soil. – Nation