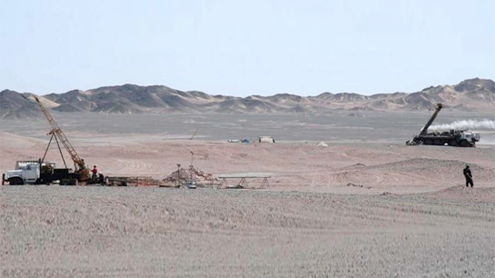 Reko Diq mining is once again topping the country’s legal discourse. At stake is one of the world’s largest gold and copper reserves worth tens of billions of dollars.

It is the same old case of excessive secrecy on commercially sensitive information by mining companies and the rising calls for transparency, openness and disclosure by the citizens.The torchbearer turns out to be one of the country’s leading legal and intellectual luminaries, Raza Kazim, who held his ground for the last five years in pursuing the stakeholders of the Reko Diq project.

It all started in the early nineties when BHP – a global mining giant — identified the mineral potential of Chaghai’s Tethyan belt in western Balochistan. This was inferred from the 1956-58 basic geophysical reports of the American Geological Survey complemented by satellite imagery of the earth’s crust over 13,000 square kilometres of Chaghai.

It was morally and politically incorrect for both the caretaker government and a global corporation like BHP to sign off Balochistan’s largest sub-surface asset to a single party without proper international bidding and through the BDA and not Balochistan’s Ministry of Minerals. At stake was over $ 500 billion worth of copper and gold extractable over the next century.The reserves are shallow, only 21 metres deep and ideal for an open pit going down till 1,000 metres.

CHEJVA was in favour of BHP, Australia 75 percent to BDA’s 25 percent on a joint investment basis. Only 2 percent royalty was stipulated for the government of Balochistan against exploration rights over 3.3 million acres for a period of 56 years.In comparison, the Afghan government gave a similar licence of gold mining at 26 percent plain royalty for 10 years at their Qara Zaghan Gold Project in 2011.“Its not simple corruption but more a case of culpable national incompetence,” boils Raza Kazim.

Even the Democratic Republic of Congo has cut much better and more transparent extraction deals from global mining giants for their copper and gold mines. They even have smelters/refining installed at their mine sites.Over the next three years and as a result of basic shallow drilling samples, around 14 potential areas were identified by BHP, including the goldmine Reko Diq. The Balochistan government awarded 10 prospecting licences to BHP out of these. Then in 2000, BHP relinquished all those licences except one, i.e. PL-4, and this was then amalgamated with PL-14, i.e. Reko Diq.

After having done satellite and geophysical exploration and after narrowing down on the mining epicenter, i.e. Reko Diq, BHP applied for a formal Exploration Licence in April 2002.And with roughly $ 7 million in investments and an exploration licence in hand, BHP offloaded the asset for $ 60 million to Tethyan Copper Company (TCC) of Australia in January 2006.What was surprising in this whole deal is the fact that a novice and weightless company incorporated in 1997 started active exploration in Reko Diq from 2000-2006 and even started reporting to the global mining industry its successes at Riko Diq even before buying it out from BHP. There was a performance-based buy-out alliance between BHP and TCC from 2000-2006.

One may be able to solve the riddle when one notices that the initial exploration/drilling and the Exploration Licence of Reko Diq was offloaded for $ 260 million to two global corporations, i.e. Antagofasta of Chile and Barrick Gold of Canada, in June 2006.So an investment of $ 15 million by BHP/TCC was sold out for $ 260 million within six months.That’s how global capital and the global mining industry operates on the basis of an exploration licence and some initial geophysical exploration.

Finally TCC, which is now owned equally by Barick Gold of Canada and Antagofasta of Chile, claims to have spent $ 466 million on the whole exploration and feasibilities while its own Managing Director David Moore reportedly said in 2006 that TCC would spend another $ 75 million on the project after the initial drilling expenditures, etc.In our estimation, TCC/BHP has spent less than $ 100 million on the whole project so far while it claims to have spent $ 466.3 million in the courts.

Also the TTC, unlike any other global mining company, does not carry any Annual Statements on its websites or public declarations in either Australia or Pakistan.Wouldn’t it be fair that the Supreme Court and other arbitration courts ask for proper audited and verifiable accounts of TCC with respect to its claims?Finally, the Balochistan government refused to convert the Exploration Licence of TCC into a Mining Licence and have even granted 10 new exploration licences around Reko Diq to some little known local firms. The matter is being heard in the Supreme Court and TCC also took the whole issue to international arbitration courts through TCC Australia.

Now claiming an investment treaty between Australia and Pakistan, TCC and Barick Gold are threatening the Pakistan government with billions of dollars in penalties.To make matters worse, both the Balochistan and federal government did send their lawyers to the International Arbitration Courts despite the fact that the same matter was being heard by the Supreme Court of Pakistan, which still had to give its judgement on it.The result being that the Arbitration courts have reserved their judgement while the Supreme Court isabout to dictate its detailed judgement after five long years.

TCC plans to start open pit mining at Reko Diq with a financial outlay of $ 3.3 Billion. This investment would basically be done over the next five years. The bulk of the investment would be in mining gear and a processing facility for copper concentrate and the 652 kms pipeline to transfer the copper ore to Gwadar Port from where it would be taken to copper/gold refineries all around the world.The Reko Diq ore would have roughly 0.5 percent of copper and 0.29 grams of gold per metric tonne.

The copper ore is extracted from the mines and taken to an on-site processing facility that deletes over 97 percent of the ore, leaving behind the copper concentrate. Simply put, it takes 100 tonnes of extracted ore to give three tonnes of copper concentrate, which would then be piped and shipped outside Pakistan to be processed in a refinery/smelter to provide roughly half a tonne of copper and half an ounce of gold.

According to TCC’s feasibility, an ore extraction of some six billion tonnes is projected over the next five years with an output of 200,000 tonnes of extracted copper and around 250,000 ounces of gold every year. This capacity could double if needed.The processing copper concentrate facility at Reko Diq will process 120,000 tonnes of copper ore every day.

Reko Diq project, which took over 20 years to reach this feasibility and national and international litigation levels is the second major copper/gold project of Balochistan, the first being Saindak.In the Saindak project, the federal government spent over $ 200 million to develop a mine and processing facility for concentrate copper ore in the early nineties when Reko Diq just got started. Having worked and apparently failed at the project, the federal government handed the whole project to MCC China at only $ half a million per annum fee in 2001.

The Chinese have been extracting copper ore and shipping its concentrate to China over the last 12 years and giving the federal government around $ 60 million per annum as share of its 50 percent profits. The remaining 50 percent stays with the Chinese.The government’s attitude towards strategic national assets can be gauged from the fact that the federal government has less than 10 employees to look after the whole of Saindak Copper Project in the Ministry of Petroleum while it employs over 90,000 persons for Pakistan Railways for the same amount of revenue. –  Dailytimes