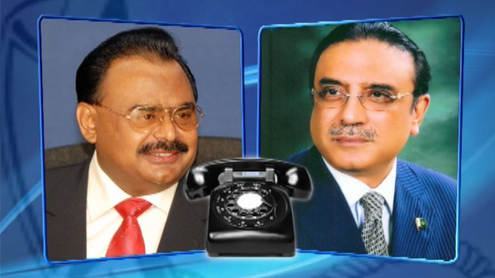 Spokesperson Senator Farhatullah Babar said that both the leaders discussed current situation obtaining in the country. Issues that came under discussion included law and order in Karachi, energy shortages and economic situation in the country.Altaf Hussain congratulated the President for pursuing the policy of reconciliation which he said had resulted in the coalition democratic government approaching successful completion of its constitutionally mandated term of five years.

He said that as coalition partner the MQM will continue to support the government in pursuit of democratic ideals, supremacy of the Parliament and for common betterment of the people.The President thanked the MQM chief Altaf Hussain for reiteration of support to the government and said that the government also welcomed and looked forward to continue support of MQM on all important national issues.The President said that the success of reconciliation policy was also owed to cooperation and understanding of political forces in the country particularly the parties in the coalition government.

The President said that he was very pleased that the democratic government was nearing the completion of its full term and was poised to hold free and fair elections in the country within the constitutionally mandated timeframe.Senator Farhatullah Babar said that the President during talk with Altaf Hussain also appreciated the efforts made by all political parties including MQM, whether in the government or the opposition, for their positive contributions in the bi-partisan Parliamentary Committee on election reforms to ensure free and fair elections in the country under the auspices of an independent and empowered Election Commission.

He said that it was a good augury for the forthcoming elections that, for the first time in the history of the country, the Chief Election Commissioner had already been appointed with consensus of the Opposition.The Spokesperson quoted the President as also expressing hope that with the consensus measures recently taken including the independence of the Election Commission, the consensus over the appointment of CEC, CNIC based voters lists, the provision of a neutral caretaker set up with consensus of Opposition and setting up of a bi-partisan Parliamentary Committee on election reforms the specter of manipulative power transfer would be banished for ever. – APP