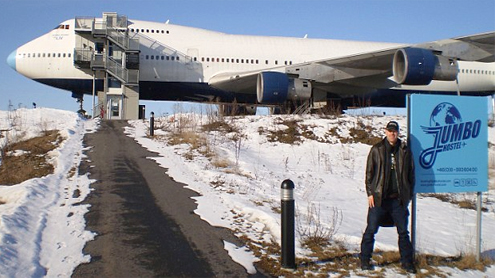 I’ve never been particularly interested in how the other half lives. But I’m obsessed with how they fly.

I’m the passenger who dawdles and tries to poke his head into the First Class cabin whenever he boards a plane. I stare, jealously, at the fat Business Class seats as I’m ushered past them towards economy.If I could sleep, wedged into a middle seat at the back of the plane, I’d dream about the passengers at the front. They’ll have fully flat beds, soft white duvets and fluffy pillows. They’ll get hot chocolate and cookies before a long, uninterrupted sleep. Well, I’ve finally found a way to get all that and more.

I’ve discovered how to get a perfect night’s sleep on a plane, to snuggle down on a wide, flat bed and enjoy cool, soft sheets. I’ve found out what it’s like to have plenty of space to move around and to wake, refreshed, when your perfect breakfast tray is served.Better still, I’ve done it all for less than £100 – and the one, small drawback was that I didn’t actually go anywhere.My attempt at a jet set lifestyle began at Arlanda airport in Stockholm on a typically snowy winter’s day.

I arrived from London on an ordinary Boeing 737 with BA. All the other passengers seemed to be heading into town on buses, trains or taxis. But I had already reached my destination. I was checking in at the Jumbo Hostel right next to the main runway.The accommodation is a unique and crazy place to stay, a vast, real-life, de-commissioned jumbo jet.Twenty years ago it was crossing the world for Pan Am. Over the years the 747 has also been owned by Singapore and a host of other carriers.

Now it’s parked up in Sweden, re-painted in a bright new livery and turned into the ultimate airport hotel.Doors went to manual and were opened to the public in 2009. Today it’s got a couple of dozen rooms, ranging from singles and doubles to a quad for families and the extraordinary ‘cockpit suite’ on the upper deck that lets you play at being a pilot before you go to sleep.First impression as you walk towards the place? That aeroplanes are very, very big. You can walk under the wings and touch the vast engines.

Very soon you’ll also be able to walk along the top of one of the wings and get to a newly built observation deck as well.Climb the stairs or use the lift and you board the plane through the usual door – the one at the front on the left, just about where the rich people normally sit.There’s a reception desk, you get your room key and all the information about WiFi and everything else you’d expect at a hotel.

But you can’t miss the fact that you’re on a plane. There’s memorabilia and kit and old photographs all over the place. The old First Class cabin, where drinks, meals and breakfast trays are served, is a retro paradise. And the rooms themselves are just as much fun.Most of them are full of the plane’s original features. Want somewhere to put your luggage? Try the overhead locker. Want a bit of shade? Pull down your little window blind. Need a reading light? Try the panel above your head.You get a flat screen TV – and you can flick on to Arlanda’s live departure and arrivals board just in case you forget where you are.

One thing you don’t get is a hard, narrow, economy-class seat with a small child kicking you from behind. Each cabin has ordinary beds. They’re flat, wide and blissfully warm on a Swedish winter night.The true jet set will probably want an en-suite bathroom, so as well as a few other rooms they can book the more expensive ‘cockpit suite’ up the spiral staircase or the new ‘black box suite’ at the back.

Everyone else has to share a row of showers and bathrooms – just like you would on, well, a plane. The facilities are actually quite fun. They are built in to the body of the plane right by one of the emergency exits.Apparently very few guests leave without a photo pretending to be a flight attendant, pulling the door closed and trying to put it into automatic.The cabins themselves aren’t huge, and without en-suites they can hardly be described as five-star luxury. But the whole place is perfect for plane lovers, plane spotters or, like me, the plain daft. – Dailytimes