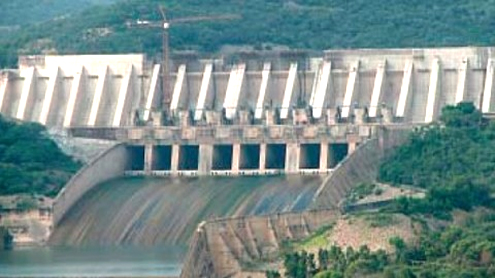 KARACHI: Ripples of Pakhtuns anger over Lahore High Court’s (LHC) ruling on the construction of Kalabagh Dam could be felt in the multi-ethnic metropolis where the sister organization of Awami National Party (ANP), Pakhtun Students Federation (PkSF), launched a fierce campaign against construction of the controversial dam.

PkSF workers resorted to wall-chalking against construction of Kalabagh dam. They termed construction of the dam as a conspiracy against Pakhtuns of Khyber Pakhtunkhawa (KP). PkSF planned to launch campaigns in educational institutes to gather support against LHC verdict.The wall-chalkings orchestrated by the student organization warned of possible blood-shed in the metropolis if the government tried to materialize tow LHC orders.

Although, the wall-chalkings mention PkSF beneath every message, but the organizations provincial leadership claims that it has no idea regarding who was maligning its name in such wall-chalkings. Sindh PkSF Secretary General (GS) Painda Khan told Pakistan Today that “PkSF have no instruction from party leaderships for campaigning against the LHC orders regarding construction of Kalabagh Dam, but if any PkSF worker or group launched campaign against Punjab high court judgment then I can not say anything.

However, PkSF has clear vision about construction of Kalabagh Dam after party leader Asfandyar Wali statement of Pakistan or Kalabagh Dam. PKSF is currently working for providing guidance to the Pakhtun students residing in the city in admissions which were opened in city’s varsities. I will not challenge the information you have because it may be district presidents of ANP who have started campaigning in the educational institutes against Kalabagh Dam after receiving the directives of party leadership, but the student organization had not yet received any orders from ANP. ”

Karachi University students were bombarded with visual assaults on Kalabagh dam and KU was seen humming with discussions on Kalabagh following wall chalking warning of a blood bath in the metropolis. Some students wore expressions of fright whereas others questioned the sanity of blood shed in Karachi and not in the city from where the verdict originated. – PT