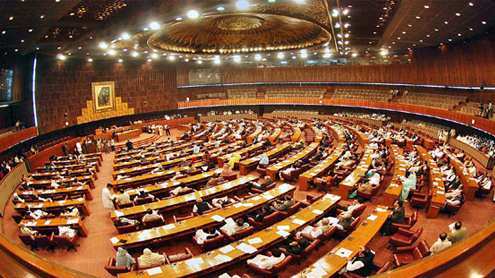 ISLAMABAD: Both the houses of parliament will meet today (Monday) with heavy agenda, including some controversial pieces of legislation which have become a bone of contention between the ruling PPP and opposition PML-N.

According to parliamentary sources, both the houses, especially the National Assembly where opposition has a sizeable presence, are likely to witness a heated debate on various legislations. The PML-N which is at odds with PPP on several issues is in a better position this time on the back of clean sweep in recently held by-polls in Punjab to press the government for making necessary amendments in these legislations.

Sources said the PPP government would make an attempt to get passed the National Accountability Commission Bill from parliament to replace the existing law, promulgated in General Musharraf’s era. The PPP tried to get this bill cleared through parliament in its last session but strong opposition by the PML-N foiled its plans.

According to sources in the PML-N, PPP had assured the party that it would share with it the findings of the report of standing committee before bringing this bill in the House. However, so far nothing has been shared with it and if the bill is brought in the House without consulting the PML-N, the party would oppose it fiercely, the sources said.

The PPP and PML-N differ on various clauses of the bill, especially on the appointment of chairman of the commission as well as the time period for investigating the cases of corruption. Although the National Assembly Committee on Law and Justice approved some clauses, but the PML-N termed them controversial and remained absent from the committee. However, the government has assured that the committee could take up these controversial issues with the opposition. – Dailymail