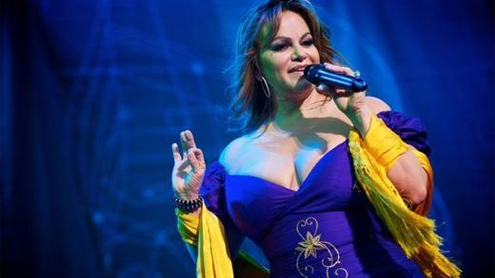 Mexican-American singer Jenni Rivera has died in a plane crash aged 43, her father has confirmed to US TV network Telemundo.

Mexican-American singer Jenni Rivera has died in a plane crash aged 43.The brunette beauty’s father has confirmed she passed away earlier this morning (10.12.12) when the jet she was flying in crashed shortly after taking off in Monterrey, north Mexico, killing four other passengers and two pilots. Officials found wreckage which is thought to have been from the singer’s plane in Nuevo Leon state.

While it is not clear what caused the crash, civil aviation chief Alejandro Argudín revealed the jet had been “totally destroyed”.The plane had been due to arrive in Toluca, outside Mexico City, but aviation authorities lost contact with it around 10 minutes after it had taken off in Monterrey.Jenni – who performed in Monterrey on Saturday night (08.12.12) – was a popular judge on Mexico’s version of ‘The Voice’, entitled ‘La Voz’, and had recently signed up for an ABC comedy pilot. – Femalefirst