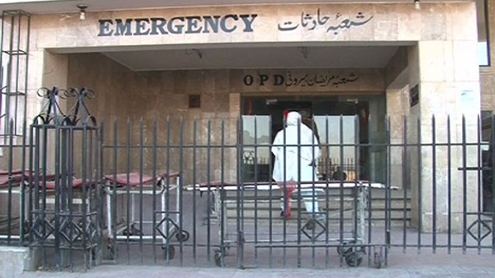 QUETTA: Protesting doctors and the government showed some flexibility in their stance on Sunday during a debate on issues of doctors and their subsequent repercussion over masses in Balochistan.

Doctors are on protest for 54 days and pressing the government to accept their demands. he major demand of doctors is the provision of security to their community among others.The debate on the burning issue was organised by the Quetta Press Club (QPC) administration, chaired by QPC President Saleem Shahid. Journalists, members of civil society, trade unions, representatives of doctors, human right activists and the health secretary were present on the occasion. Balochistan Health Secretary Asmatullah Kakar, addressing on the occasion, said that the government was ready to resolve all legitimate issues of doctors, including providing them security.

The secretary said the government was concerned about the security of doctors and a plan was being evolved to provide security to them during a meeting with doctors but unfortunately they could not reach a final decision. He said that every citizen had right to record their protest in accordance with law. However, he said, that doctors violated limits of “red zone” during their protest upon which action was taken against them.

“Doctors had announced holding a strike in emergency wards during Muharram due to which the administration had to take control of emergency wards,” he said, adding that if the government had not taken timely action a third group could have further spoiled the situation. The health secretary said that the government had “great respect for doctors but they should not prolong their protest since their profession do not allow them to protest”. “All hospitals are closed, poor people even cannot afford charges of private hospitals in the city… how could they visit other cities out of the province for treatment,” he said.

The health secretary asked doctors to end their strike and come for talks to resolve all issues.Earlier, speaking during the discourse, Pakistan Medical Association Balochistan leader Doctor Sadat Khan Tareen said that restoration of suspended doctors was not the demand of doctors. “We are not safe. We were badly treated by police… even shells of tear gases were fired on us. We were incarcerated and badly treated,” he added.He said that doctors were even not safe in hospitals and they had to perform their duties in an atmosphere of threat and stress but the Health Department never bothered to address doctors’ grievance. He said that over 72 professors were suspended.

“Bolan Medical College is passing through a difficult phase due to suspension of professors and it is temporary losing its registration,” he said.Tareen said that doctors would continue their strike until their demands are met. He also criticised the government for legislating against doctors who protest for their rights. – Dailytimes