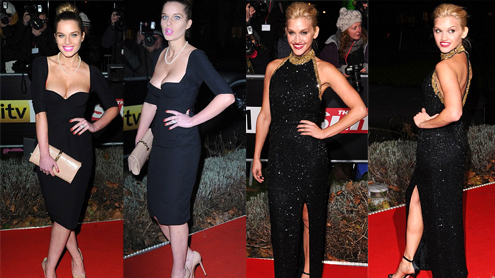 Philip Schofield and Amanda Holden were hosting the annual event established to honour ‘the bravest of the brave’.Helen, 22, gave her own salute to our boys in a square necked plunging black gown with lashings of pink lipstick and a classy string of pearls, while Ashley made the war effort opting for a daring diamond encrusted backless dress.Her blonde hair was pulled back in a tight bun as her deep tan from her time in I’m A Celebrity… Get Me Out Of Here shone.

With her nude shoes and bag Helen looked at ease on the red carpet with her deep tan, far from her anxiety in the jungle.Also known as The Millies or the Night of Heroes. Patron The Prince Of Wales usually attends. Judges include Jeremy Clarkson, Frank Lampard, Mark Cavendish, Andy McNab and Myleene Klass. Royals and others also graced the red carpet.Helen’s outfit may have appeared relatively conservative from the front but at the back it was a different story with a corset style lace up and red lining, it was more racy than conservative.

And other celebrities certainly pulled out all the stops with Myleene Klass looking ravishing in a peach ruffled gown which accentuated her curvy figure.The mother-of-two took the crowds breath away in her gown and her curls pulled away from her neck, showing off her deep tan.Model Elle MacPherson took the event, held at The Imperial Museum, to a new level in her chic ball gown.

Her fishtail dress, made by Suzanne Neville, had a sweetheart neckline, it had a ruched bodice in black chiffon over champagne satin, and a full skirt in organza flowers.Singer and TV personality Myleene was among the judges who decided the winners of tonight’s awards.The 34-year-old said that, as a ‘Navy brat’, she was honoured to have taken part in what she described as a difficult task.

Speaking on the red carpet, she said: ‘How do you choose? The difficult thing is that you already know they are going to get up on the stage and say they were just doing their job.But you just think ‘well, actually, when you think of what our jobs are, comparatively, you are a hero’.’Thousands of people vote in the awards, honouring wounded soldiers and the ceremony, which is also known as The Millies, attracts royalty.Olympic royalty was also present with Strictly star and cyclist Victoria Pendleton hitting the red carpet in a sleek red satin dress with trail. – Dailymail