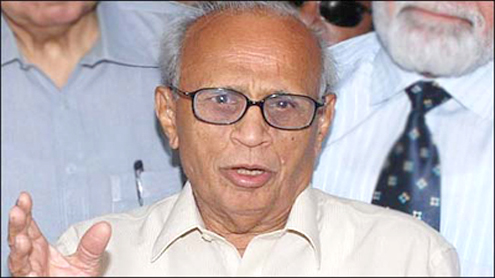 KARACHI: Chief Election Commissioner of Pakistan Justice (retd) Fakharuddin G.Ibrahim has said that the order of Supreme Court (SC) in connection with the verification of voters lists in Karachi will be implemented in letter and spirit.

This he stated in separate meetings with representatives of political and religious parties including MQM, PML-N, ANP, Jamaat-e-Islami and Jamiat Ulema Islam-F at the provincial Election Commission office here on Thursday.He said the Election Commission has started preparing strategy in the light of the Supreme Court’s decisions regarding verification of voters’ lists and delimitation of different constituencies.

The Chief Election Commissioner hoped that the work in this regard will be started next week.He also assured the representatives of political and religious parties that each and every step will be taken for holding of free, fair and impartial general elections in the country and no one would be allowed to violate the code of conduct.The representatives of political and religious parties also put forward various suggestions for making transparent and error free voters’ lists. – Breorder