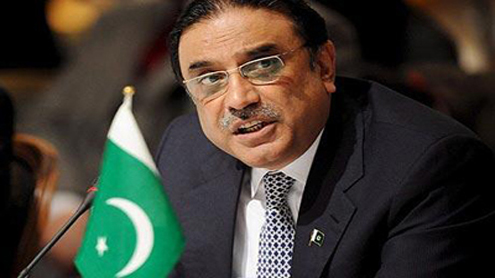 ISLAMABAD: President Asif Ali Zardari on Thursday, emphasising the need for more foreign investment in Pakistan, urged the investors to play their role in formation of long term investment policies.

“We want to make Pakistan a profitable place to do business without any problem,” said the President while addressing a luncheon reception hosted by him here at Aiwan-e-Sadr in honour of the members and officials of Overseas Investors Chamber of Commerce and Industry (OICCI).Investors, President said should consult the main political parties of the country to develope a consensus among the major political players on investment policy for at least ten years term to ensure stability and continuity.

The reception was also attended by federal ministers, diplomats, representatives of leading business organizations and leading investors.He asked the business community to highlight sector-specific problems and their solutions and make the Government and politicians to forge consensus on them.President Zardari said there should be at least consensus for the next ten years for continuation on the investment policies to realize the objective of economic development and prosperity.

He asked businessmen to organize an All Parties Conference on economic issues and he would himself attend such a moot to have consensus on vital issue of investment and economic policies of the country.The President said that when the present government took the reins of power in 2008, the economic conditions of the country was deplorable.He said that stock business had greatly plummeted while foreign exchange reserves had fallen to the level of just four billion dollars. Besides, terrorism had greatly affected the law and order situation in the country.

The President said that the government took a number of steps to improve the country’s economic condition and increase resources of the provinces.He said that although resources of the provinces have now increased but they are yet to shoulder their responsibilities in economic development.The President said Pakistan has the potential to grow and develop in all sectors.”We have to tap this potential before asking our friends to help the country,” he added.

The President, however pointed out that the international community ought to help Pakistan as it is fighting a war that was left behind in Afghanistan by the world community.He pointed out that the European Union has now granted Pakistan Preferential Market Access but the country is seeking GSP plus status.The President said the strength of a country lies in human resources and economic capability and examples of Singapore and many other Asian countries, are before Pakistan.He said the job of the Government is not to do business. It is for the Government to create the enabling environment and it is for businessmen to do business, he added. – Brecorder